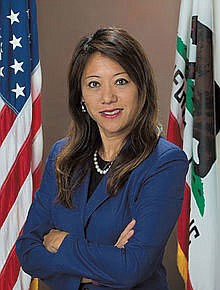 California State Treasurer Fiona Ma has been selected by leaders in the finance industry as the winner of the 10th Annual Freda Johnson Public Sector Award for Trailblazing Women in Public Finance for having broken through numerous glass ceilings and for her commitment to mentoring young women in the workplace.

The award by Northeast Women in Public Finance (NEWPF) and The Bond Buyer newspaper is presented annually to two women who are accomplished leaders in the public finance industry, according to Vivian Altman, who along with Kimberly Lyons serves as co-presidents NEWPF.

“The honoree has taken the initiative with respect to her career and is a role model as to how to be a leader; has introduced innovative practices, financings or programs that have provided benefits to the municipal industry; developed individuals in the industry, actively serves as a mentor; promotes the participation and professional growth of women in public finance; and, demonstrates the highest levels of professionalism and integrity, reflecting positively on the public finance industry,” said Altman. “Treasurer Ma has maintained a lifelong focus and commitment to promoting women and encouraging diversity in workplaces.”

The winner of the private sector award is Suzanne Mayes, Co-Chair of Cozen O’Connor’s Public & Project Finance practice group and Co-Chair of the Business Law Department.

Named for Freda Johnson, whose outstanding and successful career in public finance has inspired so many women in the municipal bond industry, the award recognizes those serving or who have served in public finance and epitomize the qualities that Freda brought to our industry as a “trailblazer,” leader, innovator and mentor. She was also Executive Vice President and head of the Public Finance Division at Moody’s Investors Service from 1979 through 1990.

“Treasurer Ma has been selected this year’s winner of the Public Sector Freda Johnson Award because of her strong commitment to the people of California, her outstanding work as State Treasurer, and her position as a leader in the public finance industry,” said Freda Johnson, a founding board member of NEWPF.

Treasurer Ma is the first woman of color and the first woman CPA elected as Treasurer. As the State's banker, she oversees and provides transparency to stakeholders on the State's cash flows, investment portfolio, local government funds and outstanding debt. She is also responsible for presenting her recommendations for the State's annual budget, the fifth-largest economy in the world if the State were an independent nation.

She has maintained a lifelong focus and commitment to promoting women and encouraging diversity in workplaces. In two years as Treasurer, Treasurer Ma has promoted many women into positions of influence. Her Chief of Staff is a woman and appointees to numerous Commissions and Boards are made up of more women than in previous administrations.

“My goal has always been to level the playing field, which includes mentoring women and encouraging the next generation to pursue their dream,” said Treasurer Ma. “To receive such a prestigious honor while doing that is truly humbling.”

Sandra Kim, who served as the moderator of the panel that recognized Treasurer Ma at the recent awards event, credited Treasurer Ma for “breaking numerous glass ceilings, and has done so with grace and warmth.”

“Treasurer Ma is truly an inspiration,” said Kim of the investment firm UBS, which was the sole segment sponsor for the awards program segment that named the Treasurer as the winner of the Freda Johnson award. “Given her background as a CPA, small business owner and local government elected official, Treasurer Ma not only brings financial expertise and exceptional technical skills to her role, but also embodies accessible and empathetic leadership,” said Kim. “She believes strongly in mentorship, and builds teams and communities with the goal of making things better for all Californians.”