Intersection of internet and COVID-19 brings malfeasance upon digital frontier 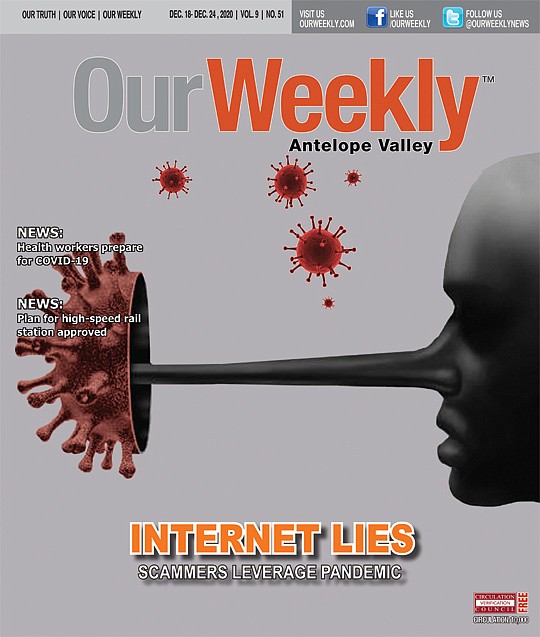 Our current worldwide epidemic has permeated every facet of life. It might be said that the internet, which preceded the coronavirus, is a Godsend in that it facilitates working from home, thus minimizing that pesky commute to and from work, and decreasing the possibility of exposure to the dreaded coronavirus or COVID-19. But the internet apparatus, meant to smooth out life's difficulties brings with it new problems and complications to sort out, including the intervention by groups and individuals with nefarious intent. Most notoriously—the foreign interference in the 2016 U.S. presidential election, leading to Chief Executive Donald J. Trump’s victory.

These unscrupulous parties can undermine even the most sophisticated among us. CyberSecurity giant FireEye, charged with protecting the government and corporate imprints like Equifax and Sony, recently was victimized by a Russian Intelligence Service hacker team, code named “Cozy Bear” (it has a sister entity called “Fancy Bear” along with other groups tasked with plundering the cyber-verse), which previously broke into the systems of the Joint Chiefs of Staff, the State Department, and the White House.

Cozy Bear (implicated in the 2016 election hacks) has been linked to attempts at accessing or disrupting research related to cures for COVID-19.

In a telling antidote to the obliviousness of the current administration, Homeland Security director Christopher Krebs was fired, in Trump's words "effective immediately" after he debunked the President's allegations that the 2020 election was compromised by outside interference on Nov. 17. On Dec. 14 the Trump administration confirmed Kreb's assertions. In a prepared statement National Security Council spokesman John Ullyot acknowledged the following:

“The United States government is aware of these reports and we are taking all necessary steps to identify and remedy any possible issues related to this situation.”

Predation in the 21st Century, a time honored tradition With the intersection of the coronavirus and the internet, we are faced with simultaneous benefits and drawbacks, especially in minority communities. Minorities historically suffer the problem of liquidity, or cash flow, hence Blacks and Hispanics are less likely to have computer and/or internet access in their homes than Whites. Curiously, these groups are more likely to own smartphones as a primary method of communication. See data from

As a result, these communities are hamstrung by their difficulty in accessing this increasingly mainstream source of information. Camille Stewart is an attorney whose career has largely been spent in the comparatively new arena of cyber-security, toiling under the auspices of the Department of Homeland Security, Google, and similar entities. From this perspective, she says that marginalized groups might be less sophisticated in dealing with this new technology, and the methods used by unscrupulous parties to take advantage of the unwary.

“Internet scams are driven by a motive of opportunity,” she said. In an email exchange with Our Weekly, she stated that “...low income communities, which are often minority, without access to technology or without digital training may be more susceptible to scams they encounter to the extent they are not familiar with common tactics.”

This recent phenomenon by new age con men is merely an old example of predatory behavior updated for practice in the new millennium, as noted by the passage from Mark Twain.

“Hackers are capitalizing on this moment. There are new scams leveraging the pandemic to reach potential victims,” Stewart notes, bringing us up to date. “That may be social engineering attacks like phishing scams that use COVID-19 related information to lure you to click a link or download a malicious attachment.”

“The trend around ransomware attacks has continued as well,” she continues. Compounding all this is the fact that Blacks are skeptical of health-related services due to the grim historical, unethical, medical experiments. (For the uninitiated, refer to the Tuskegee syphilis studies, gynecology research by J. Marion Sims and the story of Henrietta Lacks, to name a few.)

“The racist, xenophobic, and otherwise hateful or discriminatory views reflected have always been there—they just have a means to amplify their narratives,” Stewart said.

The motivation to take advantage of the misfortune of others is a con’s time-honored practice that began long before the advent of the computer age, and will continue. The existence of cyber commerce has eliminated the need for con men to personally engage with their marks, as demonstrated by the recent controversy in which enterprising inmates within the California Department of Corrections secured $140 million in unemployment income between March and August. The Information Age has leveled the field so that even the incarcerated can emulate investment advisor/fraudster Bernie Madoff in fleecing the unsuspecting of their finances.

This American tradition has continued in fictional form, in literature and with the emergence of the genre of cinema, highlighted by the performances of Will Smith in 1993's “Six Degrees of Separation,” and Matt Damon in “The Talented Mr. Ripley (1999).” Their high-tech counterparts are sure to follow.

Regardless of the level of enlightenment or expertise, folks who traverse the web (regardless of race or ethnicity) are susceptible to society's morally deficient, who see the World Wide Web as a new frontier for illicit plunder. A causal perusal of the silicon byways yields a score of listings for COVID-19 testing devices, not all of them legit. No less an authority than Los Angeles City Attorney Mike Feuer used his office to warn the gullible about such scams during the early days of the pandemic (see https://www.lacityattorney.org/covid19), and similar agencies such as the Food and Drug Administration (https://www.fda.gov/consumers/consumer-updates/beware-fraudulent-coronavirus-tests-vaccines-and-treatments) and the Office of the Inspector General (https://oig.hhs.gov/coronavirus/fraud-alert-covid19.asp) repeated his sentiments.

Darkness before the Light

Finally, often within the darkness of a bad situation one can often find a consoling tidbit of optimism.

“The internet may provide cover for some but it is also uncovering the hate and racism pulsing through our society such that we are being forced to address it head on,” Stewart said. “Additionally, the internet has become a tool for accountability for racist actions and narratives.”

The telling aspect of cyber trafficking continues to be its conveyance of information, even through the morass of quarantine and isolation.

The pros and cons of enlightening the masses while providing an avenue for potential chicanery is likely to be argued over and debated in the foreseeable future. Like most of humanity's inventions, the fruits of it's existence are ambiguous, predicated in Camille Stewart's words: “...the capacity to break down barriers or create barriers depending on how they are wielded.”