Think of Mother Earth this season 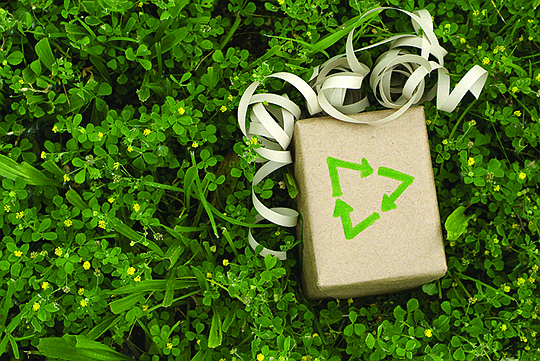 The holiday season might be the most joyful for humans, but the worst for Mother Earth due to all the waste that is being produced between Thanksgiving and New Year's Eve. Americans especially tend to waste more food—or produce more waste in general—than other countries, according to a 2019 report conducted by the global consulting firm Verisk Maplecroft, Americans produce 12 percent of the world’s municipal solid waste (MSW)—also known as household trash—but only makeup to 4 percent of the planet’s population. Individuals in the United States generate more than 1,700 lbs of trash in a year, which accumulates to 239 million tons yearly.

The National Environmental Education Foundation (NEEF) said that the amount of holiday trash that accumulates between Thanksgiving and New Year's Eve has increased by 25 percent - which is one million tons of additional trash per week. Studies suggest that by 2050 there will be more plastic waste than marine life swimming in the ocean.

According to the NEEF, this is how much plastic waste is being produced yearly during the holiday season:

• 15 million used Christmas trees - that can be seen on the street graveyards a day after Christmas Day.

• Miles and miles of ribbon - 38 miles to be exact. Which can wrap around Mother Earth.

• And last but not least, the packaging material, worth $11 billion.

The issue with this much plastic being wasted, not just from wrapping paper and ribbons, or discarded Christmas trees but also plastic cups, utensils, and paper plates from holiday parties, is that once it ends up in the landfills, it goes through a decomposing process which involves bacteria to break it down. During that process “landfill gas” is being set free. This type of gas is a combination of carbon dioxide, water vapor, and methane. Methane emission, as a by-product of human-produced waste in landfills, is the third-largest source of ozone pollution in the U.S.

Any individual can contribute to make a difference and be part of environmental change by doing a few things differently.

Instead of sending out holiday cards this season, why not send an electronic card? Or make a phone call to your closest friends and family to save the trouble of buying paper cards that would end up in the trash anyway. Approximately 2.65 billion Christmas cards are sold yearly in the U.S., which could fill up an entire football field 10 stories high. However, if each American would send one less holiday card this season, the entire nation could save 50,000 cubic yards of paper alone. If postcards are a must in your holiday tradition, get the ones made out of recycled paper and avoid the fancy glitter and glossy ones, since they can’t be recycled.

When it comes to holiday shopping, make sure to use reusable bags, therefore you save receiving additional plastic or paper bags, which in the end will be a great save for Mother Nature. In regards to gifts and wrapping them, why not give a gift that involves being in nature, such as a camping trip or visiting a national state park. Other gift options could be something that isn’t “trendy” so to speak but is an “evergreen” gift, such as board games. However, home-made gifts, such as beauty products or candles, as well as key chains, and even home-made jams and cookies in reusable jars could be a great option as well.

Although looking for Christmas gifts could be overwhelming and challenging, there are many ways to be creative and use environmentally friendly options, such as used books, a plant-kit,

A good way to recycle wrapping paper is by saving it from the previous years and telling friends and relatives to do the same, or buy wrapping paper made out of recycled material. Another option is to use reusable packaging such as cloth bags, tints, boxes, or even baskets,

as well as ribbons made from fabric, not plastic.

Once it’s time to discard the Christmas tree, schedule a pick up for recycling. LA Sanitation & Environment (LASAN) has curbside collection for Christmas trees. First, remove all decorations, tinsel, and the tree stand. Then cut the tree into pieces, if needed, to fit into

green bin and place that green bin out for regular pick-up on collection day. If the tree is too big, simply place it curbside next to the green waste bin on collection day. Flocked trees and artificial trees can not be recycled and must be placed in the black container to go to the landfill.

LASAN recycles Christmas trees and uses them to produce compost and mulch that is available to residents for free. For more information, visit at www.lacitysan.org.

Being environmentally conscious also goes for electronics. Turn off Christmas lights when you are done for the day, don’t leave them on overnight.

Let this be a season of thoughtful gifting and wrapping. Happy Holidays.