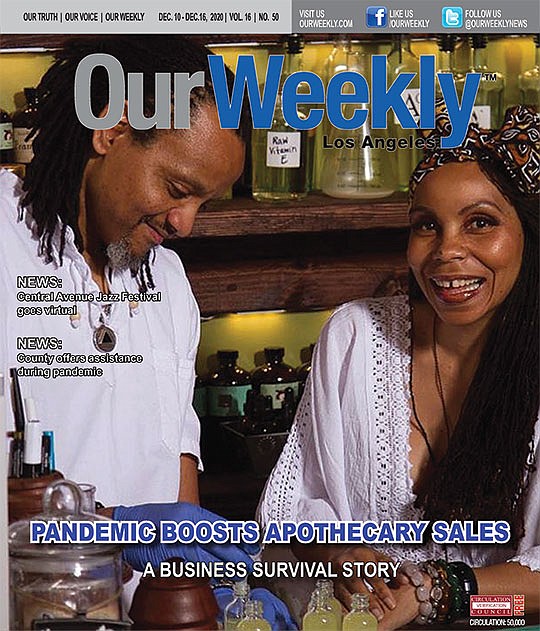 Not all Black-owned businesses are struggling during the ongoing COVID-19 pandemic. Despite coronavirus, profits are up at Nappily Naturals Apothecary in Leimert Park Village.

Nappily Naturals has been rooted in Leimert Park since the fall of 2018. The apothecary specializes in natural health via herbs, oils and teas. They also sell natural beauty and hair products. As many businesses have closed for various reasons during the pandemic, Nappily Naturals has experienced a year of growth in 2020.

“(Sales) have actually increased because people are wanting to get healthy,” said Porschae Norwood, Nappily Naturals assistant manager and Askia’s daughter. “It’s very tragic that a lot of other businesses are losing customers or closing. We can really appreciate what we have here because we’re not losing (customers) and we’re helping the community.”

A visit to Nappily Naturals Apothecary is a guided experience with a sense of community and respect. In large part, because the staff is family.

“Black people have an opportunity to spend their money with whomever they want. Our job is to treat them in such a way, where they want to spend it with us. It’s an honor,” Askia explained.

“With that in mind, I try to tell my children... this is a sacred duty and if we can get that across to Black people, not the product but the duty of service, then the revenue generation will have a positive effect because we, in turn, should turn that around and benefit the community more,” he continued.

According to management, the average customer spends a minimum of $20 dollars, purchasing various organic African teas and plant-based shea butter compounds by the ounce.

Donna Brown has only been to Nappily Naturals twice. “Coming here and getting natural herbs really does help,” said Brown. “The more natural the better.

We have to get in touch with what God has given us from the (earth),” Brown said, noting she’s already sold on the apothecary as her go-to spot for natural products for beauty and health.

“The smell is what does it for me,” said Brown, who lives in West LA.

She’s been seeking a more holistic approach to self-care.

“The crystals for healing—it means something to me. It really does work when you believe and you have faith… so many things that they are pushing into our bodies, do not work for us. It gets us addicted. So those over-the-counter drugs are exactly what they are, they’re drugs.

“We can’t keep putting our money into these factory processed things that are killing us and our children,” Brown added.

“The raw honey, that really helps a lot. Putting that in your tea, you notice that you’re not coughing up as much mucus as before. You’re not as constipated as before,” Brown said.

When looking up and down Leimert Park’s small business district, Nappily Naturals, at 4342 Degnan Blvd., consistently has the most customers.

“I am so honored and grateful. We do pretty well. This is the perfect area. Leimert gathers all of the people who are into this stuff already, so we’re just providing what people were already gravitating to,” Askia said.

Leimert Park is known in many circles as the heart of the African-American community in Los Angeles. It is also a cultural retail and African diaspora art destination in the Crenshaw Corridor.

“I’ve actually been working here for about four months. I moved here from Mississippi to help the expansion of my family’s business,” said Norwood.

Norwood said the establishment also has an online presence, setting aside items for local pickup and shipping items across the country.

“Just like people (shop) in the store, that’s how it is online,” she said.

Expanding during the pandemic

“We have not lost any business… customers come back and bring friends and family because each one, teach one,” Norwood explained. “As soon as they leave our store, with their herbs and they make that change, they’re bringing their family and friends.”

After successfully selling teas, herbs, roots and powders, Askia believes the natural progression in the health and wellness space is to begin selling shelf stable items like beans, rice, grains, oatmeal and olive oil. So the family-owned business is putting the final touches on “Naked,” an off-shoot of Nappily Naturals, to be located right next door to the existing storefront to sell dry goods and bulk food.

Meanwhile, for customers across LA, Nappily Naturals is a safe haven during unprecedented times.

“It’s home and it’s real… you walk in and they welcome you and it’s a warm, loving feeling,” said Brown. “There’s nothing wrong with being nappy and happy.”