Report from the UCLA Center for Neighborhood Knowledge 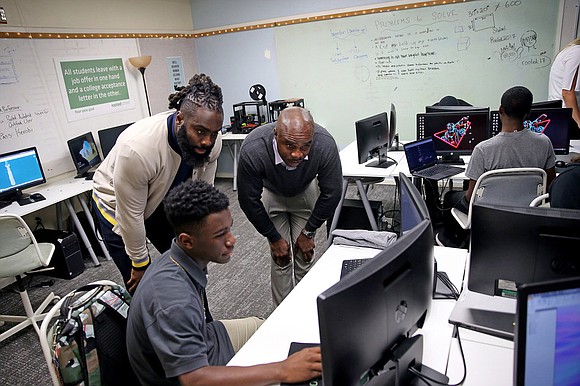 While students' access to computers and the internet improved during the pandemic-plagued and largely remote fall school term, a clear digital divide persists, especially among Black, Hispanic and low-income students, according to a new report released today by the UCLA Center for Neighborhood Knowledge.

"It appears that the lack of access has become less severe this fall than it was last spring, as schools have made adjustments to support remote learning,'' said Paul Ong, the center's director and an author of the report.

"But it is also clear that a lack of access and real and troubling divide remains.''

This digital divide, the authors say, translates into students missing lessons, being unable to access materials and struggling to complete assignments -- all of which have significant implications for long-term learning and success later in life.

The researchers used data from the U.S. Census Bureau's Household Pulse Survey to provide a current look at household access to computers and the internet. Their findings show that the rate of limited digital access for households fell from a high of 42% during the panic and chaos of school closures last spring to about 31% this fall.

But the data also makes clear that during the during the fall term, racial and economic inequality has remained significant, with Black and Hispanic households being 1.3 to 1.4 times as likely as white households to experience limited accessibility. Low-income households are most impacted by digital unavailability, with more than two in five having limited access to a computer or the internet, researchers found.

In addition, since mid-October, the rate of digital inaccessibility has increased slowly but unmistakably. The researchers are concerned that the divide may worsen amid the current surge in COVID-19 infections and resulting restrictions.

"This new research details a persistent and troubling digital divide among students, with far-reaching implications for educational access and equitable opportunities,'' said Tina Christie, the Wasserman Dean of the UCLA School of Education and Information Studies, which co-published the report with the Center for Neighborhood Knowledge at the UCLA Luskin School of Public Affairs.

According to Ong, persistent digital inequality threatens to widen disparities in achievement as minority and low-income children become adults, contributing to an intergenerational reproduction of inequality.

"The disparities in limited technological resources for virtual learning are not just today's education crisis,'' Ong said. "Falling behind increases the achievement gap, which has long-term social and economic implications. To avoid this tragedy, we must act immediately and decisively to close the digital divide.''