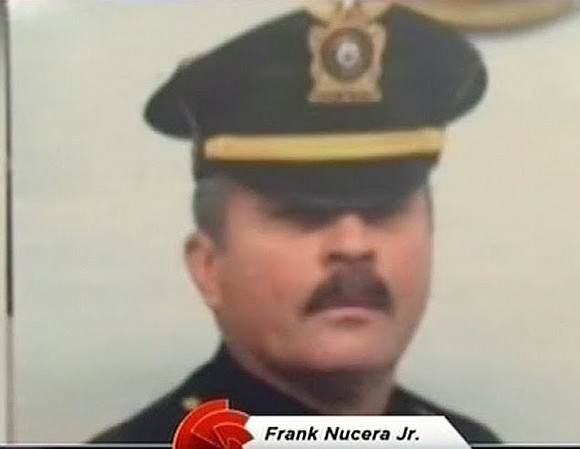 A former New Jersey police chief standing trial on charges he slammed a Black teenager’s head into a doorjamb reportedly called President Trump “the last hope for White people” before the 2016 election. “I’m telling you, you know what, Donald Trump is the last hope for White people, ‘cause Hillary (Clinton) will give it to all the minorities to get a vote,” said Frank Nucera Jr., former chief of Bordentown Township, according to N.J.com’s reporting of a transcript displayed at trial this week.

“That’s the truth! I’m telling you.” Nucera, 62, is charged with a hate crime, deprivation of the suspect’s rights and making false statements to the FBI in connection with the September 2016 arrest of an 18-year-old Black man. Two officers were escorting the handcuffed teenager from a hotel into a police car when Nucera approached the teen from behind and slammed his head into a metal door jamb, according to a criminal complaint filed in federal court in New Jersey.

The incident was part of what prosecutors alleged to be a “significant history” of racist behavior in which Nucera referred to African Americans with the n-word, compared them with the Islamic State, said he’d like to shoot them on a firing squad and tried to use police dogs to intimidate them. Bordentown, located outside the state capital of Trenton, is 77 percent White and 13 percent Black.

The allegations represent striking racism from a jurisdiction’s top law enforcement officer and nod at the racial tensions underlying the 2016 presidential election. Trump’s campaign rallies were overwhelmingly White, while Clinton, the Democratic nominee, emphasized racial issues during some of the biggest speeches of her campaign.

Nucera’s comment about Trump came after a sergeant brought up the teenager’s arrest as he covertly recorded the chief, according to NJ.com. Sgt. Nathan Roohr and the FBI decided to tell Nucera a falsehood that the teenager’s family planned to sue the police department.

Roohr mentioned that Nucera allegedly had slammed the teen’s head into a doorjamb and said the teen’s family had recorded the incident, NJ.com reported. “If they took that video and screen-shot it with your hand on his head, that’s ugly,” Roohr said on the audio recording, according to NJ.com.

"Remember they’re the ones that started the fight and hurt Shawn, and Shawn went to the hospital,” Nucera reportedly responded, referring to another officer involved in the arrest. “He was resisting.”

Rocco Cipparone, an attorney for Nucera, told the Washington Post he asked the jury to distinguish between criminal justice and social justice. Nucera losing his job and being vilified by the public constitute the social justice response to his racist words, Cipparone said.

But criminal justice applies only if Nucera slammed the teen’s head for racially motivated reasons. Nucera resigned from the police department in early 2017 when he discovered the FBI was investigating him, according to N.J.com. He was arrested months later. Nucera collects an annual pension of nearly $106,000, public records show.