A powerful tool for effective change 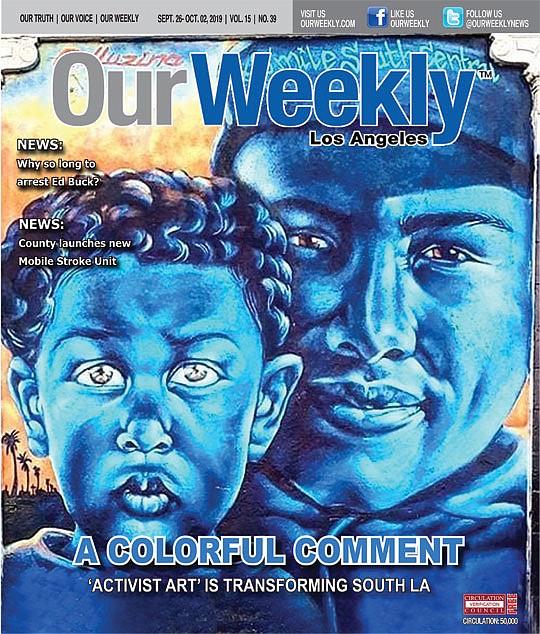 Art has always been a fascinating way to communicate moods and situations, through colors and textures. Art is also a powerful tool that can help bring positivity to the less fortunate, as well as underserved communities, such as South Los Angeles.

On the corner of Western Avenue and 48th Street is the familiar mural that reads “Welcome to South Central,” which was created by Norwegian street artist Zina. The words on one of their spray painted faces reads:

“If it’s revolutionary to want fresh food, clean water, access to education and health care, equity and justice...then I am revolutionary.”

Throughout the ‘80s and ‘90s, South LA—formerly known as South Central—saw the crack cocaine epidemic killing its community. Police brutality and gang activity were the norm, along with unemployment and resulting poverty.

Over the years, many different artists transformed the gray and beige walls of old buildings into colorful meccas that tells stories of change, love for the neighborhood, and resistance.

The art projects are the result of many non-profit social justice organizations, such as Community Coalition (CoCo), which tries to bring the community together and offers activities for the youth. Street art projects such as Smile South Central, created by Adam Ayala, is not considered vandalism, but as inspirational and powerful messaging.

Artist and muralist, Fabian Debora, who also works as the community connection director with the juvenile youth in detention at the Art for the Incarcerated Youth Network (AIYN), believes that art can unite different cultures.

“For me, anytime that I gain the opportunity to speak on behalf of the people has always inspired my art,” Debora said. “I think that art is a powerful tool and if I have that gift then that’s great. I can use it to change conditions, or bring awareness or conform [with] the people’s color, that’s what literally inspires me. Everything that has to do with the arts, it’s always based around that. For me it’s a responsibility as an artist to be able to speak on behalf of my people from past to present and future.”

The help of Homeboy Industries

“I think for me it’s always about acknowledging when I talk about the past to understand your cultural experience that has shaped us and gave us the identity, as people [Mexican-Americans].”

Debora has always been somewhat connected to the roots of his community. In the mid ‘90s he worked with the East Los Angeles Streetscapers, which was founded by Wayne Healy and David Botello in the late 1970s, as part of the Chicano mural movement in LA.

He also served as a counselor and mentor for Homeboy Industries, a non-profit organization in East Los Angeles, that serves gang members who wish to gain re-entry in society.

“I’m a community leader myself. I got my opportunity at Homeboy Industries. When I came to Homeboy Industries in 2007 to retain my life, that’s where I started to get more involved, working with drug addiction, so I became a drug counselor,” Debora said. “Soon after I started to learn as an artist the importance of art as a vehicle for the community. So I started to get more involved in utilizing art for the youth and bringing change for the juvenile justice system.”

The goal of AIYN is to build resilience and wellness, to eliminate recidivism, and to transform the juvenile justice system, through an interdisciplinary arts programming collaborative that provides exceptional arts education to the incarcerated youth. According to AIYN’S website, “AIYN believes in collaboration as an effective model to increase capacity, efficiency, and partnership.”

Alongside Carnegie Hall in New York City, AIYN co-founded CREATE JUSTICE to endorse a collaboration and promote the joining of arts and justice reforms. The birth of CREATE JUSTICE brought together various groups of artists, policy makers, funders, non-profits, and researchers from all over the U.S. to exchange ideas on how to use the power of the arts for youth justice reforms.

Muralist and multimedia artist, Michael Massenburg, has considered himself an artist since childhood, and is actively involved with the community. Besides being affiliated with CoCo, Massenburg won the contest for helping to beautify the CoCo parking lot, and he also teaches workshops at juvenile detention facilities and at local parks. At ROSELA, his goal is to raise money to fund a memorial to honor the missing and murdered women of South LA who were killed by a serial killer named the Grim Sleeper.

As a former teacher and art director, he now serves as the board president at Sheenway School and Cultural Center in South LA.

“Earlier in my career I wanted to create work that kind of connects with to where I live and the community,” Massenburg said. “I didn’t want to make paintings and drawings just to be making them. But also something that has some meaning, that has some impact, and also do some things that are community oriented, as far as being active in the community where we’re doing volunteering, activism and stuff like that, policies and different things.”

In May, a mural at Dr. Maya Angelou High School provided a makeover for that South LA campus bearing her name. The school’s courtyard was transformed into a bonafide art gallery that featured dozens of murals by various local and international artists such as Shepard Fairey, Faith XLVII, Axel Void, and 1010.

One of the biggest names, and community influencers, Nipsey Hussle, is still being remembered by various murals throughout LA, including two monumental columns which are referencing the rapper’s lyrics with hieroglyphic carvings, created by artist Lauren Halsey.

For Massenburg, “art is one of the most powerful tools for social change.” His other works include; “Educate to Elevate” at Y.O.U. Rita Walters School, “Reading to Learn Knowledge” at Mark Twain Library, and “Visions” at Vision Theatre in Leimert Park, among others.

“Art means life. Without art, there is no culture or spirit and there are no possibilities,” Massenburg said. “What is a world without colors, dance, song, poem or play? It’s a world not living.”

He currently works on a public art project for the Van Ness Recreation Center New Pool Park, for spring 2020.

A ‘war on street artists’?

Massenburg is a strong believer that activism can be delivered through art in many forms and shapes.

“It can happen in an instant or over a duration of time,” Massenburg said. “This came to mind as I participated with over 50 artists with JusticeLAnow in a jail bed drop, in 50 locations throughout the county on Christmas Eve 2017, to bring public awareness of LA county intention to build more jails. The country decided sometime after to change plans and use the funds to build mental health facilities.”

But there’s also another site, where art is considered damaging.

Los Angeles has gained a reputation for its “war on street artists” to fight vandalism on public property, but the punishment for graffiti—or street artists—could be almost as high as a drug offense. In an article in the LA Weekly in 2012, which featured an African-American street artist named Sight from South LA, the article makes note that he was sentenced to eight years and four months in state prison, but he was released after four years, for good behavior. He was targeted by the “Special Problems Unit.”

On the day of Sight’s arrest, police came to his grandmother’s home where he was residing, searching for drugs and weapons. They didn’t find anything illegal, but they took his spray paint cans instead. According to the article, “Metro and the sheriff already treat taggers as full-on gangsters, under the California Street Terrorism Enforcement and Prevention Act (STEP Act).”

Although Sight tagged and therefore destroyed public property owned by Metro, he also created beautiful art pieces, which are part of the LA culture and underground scene. He viewed art on walls as poetry and as an outlet to escape the harshness of drugs and crime surrounding his neighborhood.

On Aug. 14 at Exchange LA, 16 of LA’s best artists competed across three fast-paced rounds for audience votes. The audience circled the competitors in each round, and chose their favorite powerhouse painter to move forward.

Audience members took home a piece of the action while joining in on the competitive fun by bidding on their favorite paintings in a silent auction.

These artists were a mix of veteran and emerging talents, ready to share their process and take on a very unique Art Battle challenge for a new audience.

For more information go to https://artbattle.com/