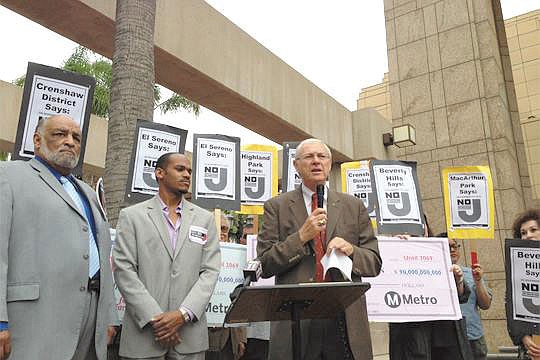 The Crenshaw Subway Coalition doesn’t see things quite that way when it comes to prospective housing projects going up along the route.

In fact, the coalition is resisting three large developments proposed for the community. One development involves the demolition of Dorset Village on Slauson Avenue and replacing it with 600 new luxury apartments.

The Crenshaw Crossing and District Square projects are two other large housing developments planned at the intersection of Crenshaw and Obama boulevards.

“Crenshaw Crossing is a real big middle finger to this community,” said Damien Goodman at a recent community meeting.

Goodman is the founder and executive director of the coalition, a grassroots group of stakeholders demanding that the Crenshaw-LAX line and any of its by-product developments are community driven.

They insist that the three housing developments being planned will not be affordable to local residents.

“As taxpayers we paid for this transit line,” Goodman said. “There should be an appropriate return to the community.”

Wesson opposes the project because the “market-rate” District Square would displace area residents. He also committed to a motion to establish anti-displacement zones to cap rents within the two-mile radius of projects like District Square.

Goodman explained that although part of the development will be located on public land now occupied by the probation department, current area residents could be displaced by higher property taxes because of the new housing.

The matter will be heard at the Nov. 19 meeting of the LA Planning Commission.

The coalition is demanding that the city take the land away from the current Crenshaw Crossing developer, Watt Companies, whom they say is on trial for bribing public officials.

They also want the project to be built as 100 percent affordable for those already living in the community.

Crenshaw Crossing, which the coalition calls a “gentrification mega-project,” is supposed to include at least a 15 percent set-aside as affordable housing for “very low income” residents (50 percent of the county’s average median income).

Goodman explained that the term “affordable housing” is based on a national scale which says residents should spend no more than 30 percent of their income on housing costs.

“There are major issues just between Exposition and Slauson on Crenshaw,” Goodman said. “We have a battle on many fronts and we need more freedom fighters.”