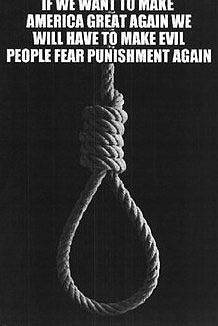 A New York municipal judge has resigned and been permanently barred from judicial office after posting an image to Facebook of a noose with a “Make America Great Again” caption, reports NBC News.

Kyle Canning, 29, a town court justice in Altona, NY, just south of the Canadian border, posted the image in February 2018 that read in all capital letters, “If we want to make America great again, we will have to make evil people fear punishment again.” The post was public, according to New York state’s Commission on Judicial Conduct, which launched an investigation into Canning’s conduct. The commission served the justice with a formal written complaint in May, charging him with conveying racial and political bias.

Canning resigned in June, and on Tuesday, the commission released the results of its investigation with a statement. “The noose is an incendiary image with repugnant racial connotations. It is the very antithesis of law and justice,” Commission Administrator Robert H. Tembeckjian said in the statement. “For a judge to use the image of the noose in making a political point undermines the integrity of the judiciary and public confidence in the courts.”

Canning had been a town justice for only a month before he posted the image to Facebook, with his term set to expire in 2021. In addition to resigning, he agreed to never seek or accept judicial office in the future. In his resignation letter to the Altona town supervisor, Canning said he felt like he was “coerced into resigning. It has been a pleasure serving this town as one of its justices, and I will greatly miss my duties,” he wrote to formally apologize for “the inconvenience and hardship that I have imposed on my co-justice and the Town of Altona.”

Canning told the New York Times he is a registered Democrat and not a supporter of President Donald Trump who made “Make America Great Again” a campaign slogan. Canning said he thought his post was in support of the death penalty. “The post was not racist. I’m not a racist guy,” he said, adding “there is not a man that I could despise more than Donald Trump.”