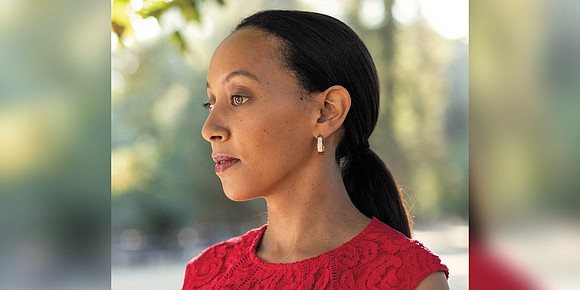 Pay attention President Trump. This is what an immigrant can become in this country. She is Haben Girma, who fled Eritean (Africa) with her mother as a child, and has gone on to conquer unbelievable obstacles.

In her new book, “Haben: The Deaf Blind Woman Who Conquered Harvard Law,” she lets people know how she navigated one of the toughest schools in the country to earn her law degree. Girma has already received the Champion of Change Award from President Barack Obama, and the Helen Keller Achievement Award.

During a recent interview on MSNBC, this remarkable woman who spends much of her time as a disability and civil rights lawyer, showed how she communicates. With an assistant at hand, she has a computer in front of her that works like this: the assistant types questions into a special computer that feeds the information into the Braille computer Girma holds. She runs her fingers over the dots to read, and she responds through speech. She speaks in a high register, but clearly, as she is able to hear high-pitched tones and has practiced her speech for years. She also travels with her seeing eye dog, Mylo.

It all takes work, but she was inspired by her parents to forge a path and strive for equality. “My parents came to the United States seeking opportunities, and they found it’s not geography that creates freedom; it’s people and communities that create freedom,” Girma said. “All of us face a choice to accept unfairness or advocate for justice.”

Growing up in Oakland, Calif., Girma heard stories from her parents about “advocacy, fighting for freedom, the war [between Eritrea and Ethiopia],” she said. “That taught me to be persistent. It’s OK to face the unknown ... you’ll pioneer your way. So those lessons have helped me as a deaf blind woman … learn to advocate so that I have a place at the table.”

That journey has been a long one for Girma, who attended a mainstream school and didn’t realize until she was about eight years old that there was anything different about her. Girma said her first impulse was to shrink down, to hide, to try to act like everyone else. But over time she met role models with disabilities who inspired her to push for more. As a high schooler, she convinced her parents to allow her to go to Mali on a program to rebuild a school, for example.

It wasn’t always easy or comfortable: In college in Oregon, she was provided with Braille course materials and other accessibility accommodations. But the cafeteria was another story. “There was a print menu on the wall and that was it,” Girma said. “Blindness wasn’t the problem. Disability is never the problem. The problem was the format of the menu.”

She asked the dining manager about posting the menu online or in Braille, or emailing it to her. The manager declined, saying he had 1,000 students to serve and couldn’t make changes for just one. Girma put up with the situation for several months, telling herself that she at least had food and that there are bigger problems people with disabilities face. But after several months, friends reminded her of her parents’ lesson: It was her choice to accept the unfairness or advocate. So Girma did her research, showed the dining manager that the school was subject to the Americans with Disabilities Act (ADA) regulations and warned him that she would take legal action if necessary.

The next day the manager apologized and promised to make the menus accessible, which helped not only Girma but another blind student who matriculated the following year. “That taught me that when I advocate, it’s not just about me,” Girma said. “It helps all the people who come after me. It benefits our entire community. That experience inspired me to become an attorney for people with disabilities.” That was just the beginning. She went on to graduate from Harvard Law School and made history as the first deaf and blind woman to do so.