Activist angry over treatment of Black clients at nail salon 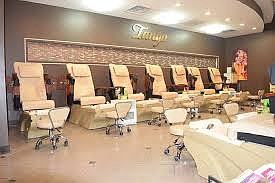 A community activist was arrested after vandalizing a South Side nail salon in Chicago. The activist claimed the salon’s owner has disrespected Black women, reports WGN. Customer Charmaine Jones said she was at Colour Nails near 83rd Street and Stewart Avenue Monday and was told to leave the business.

“He told me to get out of his chair. He’s not doing my nails. I change my mind too much,” she said. Cell phone video only captured a part of what happened to her as she left. As she was walking out she said he proceeded to “push me, shove me and hit me and attempted to bite me.”

She says she was reaching back inside the store, trying to get to her sister. Another worker can be seen attempting to grab the phone of the woman who was recording. Tyrone Muhammad, a community activist, responded the next day by throwing bricks at the salon’s windows. He was immediately arrested and charged with misdemeanor criminal damage to property. He posted video of the incident on his Facebook page.

On Thursday, Muhammad defended his action and said he’s met with the owner before to address issues at the shop, but nothing has changed. “If you see the tape, you’ll see me going in warning the sisters to clear this area,” he said. “We’re pretty much at this point commandeering this place and any neighborhood store that disrespects our women and children.”

Activists have been staging a boycott and protests following a series of incidents in recent months at the nail salon. Ja’Mal Green shared videos that showed a worker repeatedly putting his hands on female customers. One video shows the owner grabbing a wallet from a customer. The owner was taken into custody, but he says that case was thrown out. Green said he had nothing to do with Muhammad’s response to the situation, but wants to continue to put the focus on how Black women are being treated at businesses where they spend their money.

“It’s not just one situation at one nail shop,” he said. “It’s happening at multiple nail shops.” Jones added, “I want justice served mainly, I want other individuals and the Black community to know we don’t have to accept this type of behavior.” Jones filed a police report for the incident this week and police say that case is open, but there have been no arrests. The nail shop is boarded up and closed for now. The owner plans to reopen the salon soon and says he would like to meet with community leaders to resolve this.