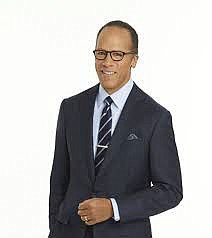 Lester Holt is probably the highest-ranking newsperson of color in the U.S. In an unprecedented move, the NBC News anchor went to prison to expose the need for criminal justice reform, reports Variety.

Holt has traveled to war-torn foreign lands and America’s smallest towns, all on behalf of NBC News. For his next journey, Holt had to go somewhere even more unusual – prison. As part of “Justice for All,” a broader NBC News report on criminal justice reform, Holt made his way to Louisiana State Penitentiary, the maximum-security prison known as Angola, for a two-night stay in a cell. The results will be shown on NBC’s “Dateline” on Friday at 10 p.m.

On Sunday at 10 p.m. MSNBC will show a “town hall” broadcast from Sing Sing Correctional Facility, another maximum-security facility in Ossining, N.Y., where he will discuss the topic of the week with, among others, singer John Legend, former U.S. Attorney General Loretta Lynch and 25 inmates from the prison.

“There is nothing normal about holding a town hall event at a maximum-security prison,” says Dan Slepian, a “Dateline” producer and specialist in criminal justice who worked with Holt on the project. The spark for the project came from Slepian, who has long covered cases of wrongful conviction, and Holt, who in recent years, has spent more time on cases of criminal justice reform. He was the first to snare an interview with Meek Mill, the rapper and musician who has tangled with the criminal justice system for years, after Mill’s release from prison last year.

Holt says his interest in the topic was in part sparked many years ago, when he covered a man being put to death by lethal injection for WBBM, the Chicago CBS station where he worked for many years. “You become very reflective in that moment: How did we get here?” he says. Holt and Slepian approached NBC News and MSNBC Chairman Andy Lack earlier this year about a broader look at criminal justice, making the point that the network could, with its various platforms and news programs, offer something that its competitors might not.

“He bought it,” Holt says. “From there, the onus was on us to deliver.” Holt believes more Americans ought to wrap their minds around the issue. “I have been in many prisons in my reporting. One of the things I have experienced is that you are forced to see these inmates as people. You meet them and talk to them, and certainly, they are people who have made some really horrible choices in life in some cases,” he says. “But nonetheless, it is important for us to hear from them. One of the main statistics that hung in my mind is that 95 percent of people who are in prison are going to get out some day. They are going to be our neighbors, walking down the street next to us. They are going to be part of our community. So we all have to care. It’s in all of our best interest they come out of prison better people than when they went in.”