Late great journalist Gwen Ifill to be honored with stamp 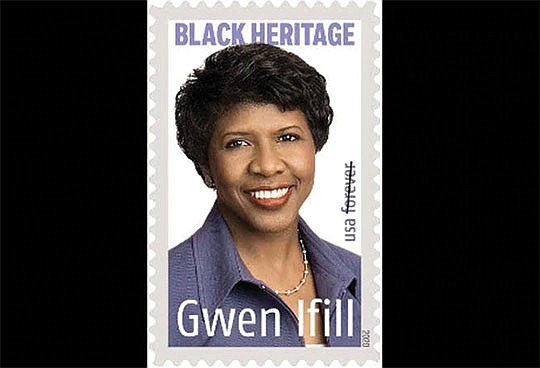 The U.S. Postal Service unveiled new “Forever” stamps Tuesday, including one featuring former Baltimore Evening Sun reporter Gwen Ifill. According to multiple news sources, including the Sun, the postal service has unveiled new stamps every year since 1847. In addition to Ifill, next year’s collection includes homages to the Year of the Rat, hip-hop and women’s right to vote. Ifill is remembered as a pioneering figure in the journalism industry. She covered government in Maryland and Baltimore for the Evening Sun from 1981 to 1984. Ifill then moved on to the Washington Post and the New York Times. In addition to her successful career with newspapers, Ifill was co-anchor and co-managing editor of PBS’ “News Hour” program. She also was moderator and managing editor of the network’s Friday night political roundtable “Washington Week.” While working for PBS, she moderated the vice presidential debates in 2004 and 2008. She became the first African American woman to co-anchor a national newscast and serve as a solo anchor of a weekly national public affairs show. Wayne Dawkins, an associate professor at Morgan State University’s School of Global Journalism and Communication, said that USPS asked him last year to help serve as a consultant for the Black Heritage series’ 43rd stamp. Dawkins had previously written about Ifill in his biographies so the postal service wanted him to review anything written about her and assess the accuracy of the stamp image. The photo of Ifill on the stamp was taken in 2008 by photographer Robert Severi. The art director for the stamp was Derry Noyes. The Morgan State journalism professor called it an “honor” to help remember Ifill. “She represents the best of the best in journalism,” Dawkins said. “I’m a great admirer of her and I’m glad this moment has come so that she can be immortalized.” She died of cancer in 2016 at the age of 61.