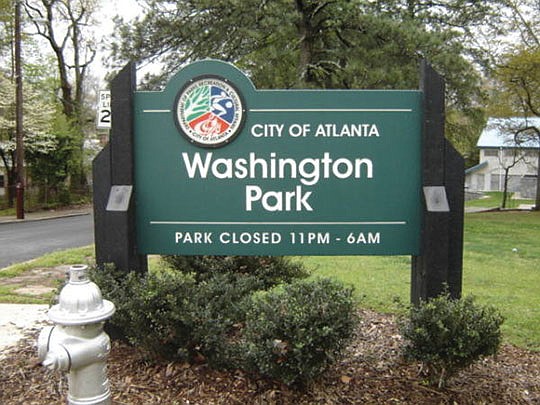 Atlanta's first African American park is 100 years old, reports CBS 46. A celebration by the Washington Park Conservancy is sharing the park's history with the generations who have loved it. A successful Black insurance executive donated the park's first acres on the west side of Atlanta after a fire in 1917 ravaged downtown. The impulse to find a green safe outdoor space spread across the city, but custom and Jim Crow laws enforcing segregation kept other Atlanta parks off limits to African Americans of any income. Those first six acres, donated in 1917, became an oasis, a retreat. As its friends and park lovers prepare for a birthday celebration Nov. 3 at Washington High School, the tennis courts bustle with young players. One of them, Patricia Clem, expects a lot from her serves. “Hope I’m gonna go pro, if not play tennis in college,” she says. Her coach, William “Wink” Fulton is serious. “She’s good!” Wink came to Atlanta from North Carolina to go to Morehouse in 1982. When his tennis racket needed a new string, he recalls somebody sent him to Washington Park. He was amazed to see a red brick building, ample courts and good-looking tennis players. “I played a little tennis that day. When I got back to school I waited in line for the pay phone and called my parents. I told 'em I found a place! A lot of important Black people playing tennis there. I said 'mom, dad I found a Black country club!' That's what I thought it was.” For generations before Coach Wink, the growing community of middle income Black Atlantans found a home and expanded around Washington Park. Othello Renfroe Jr. centered his life here. “The Black middle class of Atlanta was created here in this area. We flourished. It created so many influential leaders in this city. This is sacred ground for so many African Americans in this city. Any child raised in this city has to remember Washington Park as the only place we could go to swim, enjoy outdoors.” After decades of service in the U.S. Army, Renfroe retired, came home to pick up life in the city where he and his five brothers grew up. He also remembers a stark reality of the larger city of his youth. “I was raised in Jim Crow era. And to be frank, there were places you couldn’t go. Once the streetlights came on, you better be in your house. But this was like a safe haven for us. Where we could come.” His father, Othello Renfroe Sr., nicknamed Chico, raised his family nearby. “My father was a postman for 14 years. It was the best job a Black man could have to raise his family in the middle class. But at night, he’d come home and turn on the sports programs. Hearing about ballgames, White players who would score touchdown, interceptions. He would say ‘what about the Black kids that did the same thing? Who is talking for them?’” Othello junior says the absence of stories about young Black athletes finally got to his father. He put in his retirement papers at the post office, bought a tape recorder and began telling the world about young Atlanta athletes of color. Chico Renfroe wrote articles in the Atlanta World newspaper, became the first Black major league scorer. And now has the baseball field at Washington Park named in his memory. “There will be children who come up to me all the time. They will say my father, my mother used to listen to your father on the radio. They remember my father.” He talked in front of the silky smooth baseball field, red against the green lawns of Washington Park. Around him, joggers pushed their paces, tennis balls sang. The air in the natatorium smelled of bleach and clean water. Katherine Blake did laps. She says she can’t swim, but she can dance in the waist deep pool. She grew up, a Grady Baby, loving this park. “It’s our crown jewel,” she said. “It is gonna be a diamond after a while.” After 100 years, perhaps diamond status is here.