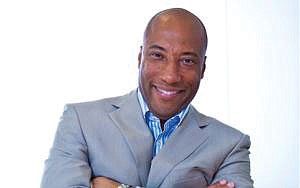 It wasn’t that long ago that Our Weekly profiled Byron Allen just weeks after he acquired The Weather Channel for $300 million. The media mogul was already established with his Entertainment Studios, which provides a lot of programming for TV (“Comics Unleashed,” “Funny You Should Ask,” just to name a couple). He also has acquired and released several independent films to box office success. Now the comic (he still appears and tells jokes) is making more moves by acquiring 11 TV stations, reports Variety. Allen is expanding his TV station holdings with the purchase of 11 small-market network affiliates from USA Television for $290 million. The largest of the stations is in market No. 79, Huntsville/Decatur/Florence in Alabama. The deal unveiled Tuesday with Atlanta-based USA Television brings Allen’s investments this year in small- and mid-sized market TV stations to $455 million. In July, Allen Media Broadcasting cut a deal with Bayou City Broadcasting to buy four stations in Indiana and Louisiana for $165 million. “I have known Byron Allen for decades and we are delighted that these stations will now be part of his dynamic company, and that Heartland management will continue to guide them,” said USA Television CEO Robert S. Prather Jr. “These stations are dedicated to their local communities and this transaction will enable them to become even stronger on both their broadcast and digital platforms.” Prather, former head of Atlanta-based broadcaster Gray Television, has been buying up stations during the past few years in partnership with USA Television parent Heartland Media and Atlanta-based private equity firm MSouth Equity Partners. “Bob Prather is an excellent broadcaster and he has done a brilliant job of assembling a stellar management team to operate these very strong network affiliate broadcast stations,” said Allen, chairman/CEO of Entertainment Studios/Allen Media. “This is another milestone for our company, as we have now agreed to purchase our second broadcast network affiliate station group within the past three months, and continue to aggressively look for other opportunities to grow our global media company through strategic acquisitions.” Allen Media is fast becoming one of the nation’s largest African American owners of local TV stations. The USA Television station deal includes stations in Fort Wayne, Ind. (Fox’s WFFT), Eugene, Ore (ABC’s KEZI), Chico-Redding in California (NBC’s KNVN), Rochester, Minn. (CBS’ KIMT) and Terre Haute, Ind. (CBS’ WTHI).