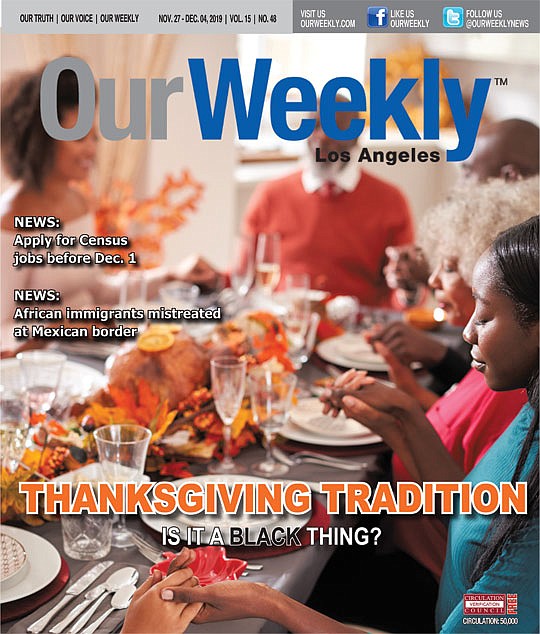 Many persons of color have since viewed Thanksgiving Day as the point when the dominant White culture (and most of the rest of the non-White but non-indigenous population) celebrated the beginning of a genocide that was, in fact, blessed by the men Americans hold up today as their historic founding fathers.

Thomas Jefferson, America’s third president and author of the Declaration of Independence, was known to romanticize Native Indians and their culture, but that didn’t stop him in 1807 from writing to his secretary of war, Henry Dearborn, that in a doming conflict with certain tribes “[We] shall destroy them all.”

‘Lift Every Voice And Sing’

As the genocide was winding down in the early 20th Century, President Theodore Roosevelt defended the expansion of Whites across the continent as an inevitable process “due solely to the power of the mighty civilized races which have not lost the fighting instinct, and which by their expansion are gradually bringing peace into the red wastes where barbarian peoples of the world hold sway.”

Roosevelt also once said: “I don’t go so far as to think that the only good Indians are dead Indians, but I believe nine out of 10 are, and I shouldn’t like to inquire too closely into the case of the 10th.”

In 1905, something distinct happened to the Black celebration of Thanksgiving. James Weldon Johnson’s landmark song, “Lift Every Voice And Sing”—often called the “Black National Anthem”—helped to inspire more African-Americans to accept the Thanksgiving tradition as more of a spiritual response to their continued plight, and this song was heard universally in big and small Black churches on each holiday. And even though the tradition of going to church on Thanksgiving Day is not as commonplace as it once was—particularly after the mass migration of African-Americans to the North following World War I—the practice is still a cherished memory in the minds of many people.

There is a particular association between the historical African-American Thanksgiving dinner and the Afro-Caribbean Diaspora. The word “yam” is from the West Atlantic languages of West Africa where the word “nyam” means “to eat.” The sweet cassava root and “yam,” “yami,” and other words refer to forms of what we call today—the tropical yam in its wild form. The sweet potato was brought from the Caribbean where it was grown by the Arawak and Carib peoples, and later by enslaved Africans brought there.

The sweet potato would cross the Atlantic early on via Spanish and Portuguese explorers who took it to West and Central Africa, often in exchange for slaves. Africans adopted the crop, appreciating its edible leaves and tubers. However, in the sugar-drenched Caribbean during the Thanksgiving period, enslaved African men and women minding the sugar cane fields would boil a sugar substance through the night and would bring pots of sweet potatoes to the sugar house where they would pour the molten hot sugar water on top to cook it and...“Voila!”...candied yams were invented.