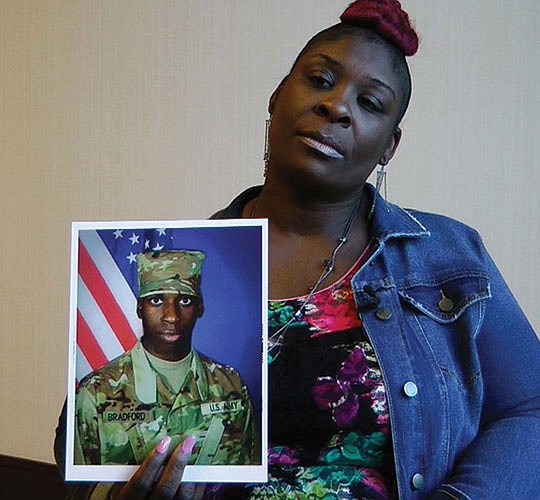 The mother of an Alabama man fatally shot last year by police inside a mall outside of Birmingham is suing the officer who killed him, reports NBC News. April Pipkins, the mother of Emantic “EJ” Bradford Jr., filed the suit against the unnamed Hoover Police Department officer and the city saying her son’s constitutional rights were violated when he was gunned down at Riverchase Galleria mall. Bradford, who was in the Army and had goals of becoming a combat engineer, was shot and killed on Nov. 22, 2018, following a shooting in the mall involving someone else. The suit was filed in the Northern District of Alabama on Friday — the one-year anniversary of Bradford's death. The 21-year-old Bradford initially started running, along with other shoppers, after shots rang out at the mall, the suit states. When he saw a teenager had been shot, Bradford drew his weapon and walked toward the location of the shooting to “try to protect people and assist the victim,” according to the lawsuit. Alabama is a concealed carry state with a state pistol permit, which Bradford had. Two Hoover officers working as mall security went to investigate the shooting and one of the officers immediately fired “upon observing Bradford, a young Black male with a handgun,” the suit states. The second officer did not fire his weapon at Bradford. The lawsuit says the officer who shot Bradford was “in violation of standard police procedure and training” when he failed to issue verbal commands and “did not verify whether Bradford posed as a threat.” Bradford was shot three times from behind — in the head, neck and lower back. A medical examiner said he died from an injury to the brain caused by a bullet. He was never provided medical aid by the officers, according to the lawsuit. The suit states that the officer’s “primary duty was to eliminate any threat to innocent civilians and first responders, not to kill them.” In February, State Attorney General Steve Marshall said his investigation into the shooting found that the officer did not break the law and he would not be charged in Bradford’s death. The attorney general’s report stated that the officer mistakenly believed Bradford was the shooter when he saw Bradford running toward the scene holding a gun. The Hoover Police Department never identified the involved officer. The lawsuit also accuses the city of Hoover of falsely claiming Bradford was the shooter. Officers initially classified him as a “threat” but later corrected themselves. The actual shooter, Erron Brown, 20, was later arrested and charged with attempted murder. Pipkins is suing for wrongful death, excessive force and unlawful seizure. She is seeking unspecified damages and fees.