‘Her Own Two Feet’ shows how to overcome adversity

A story of independence 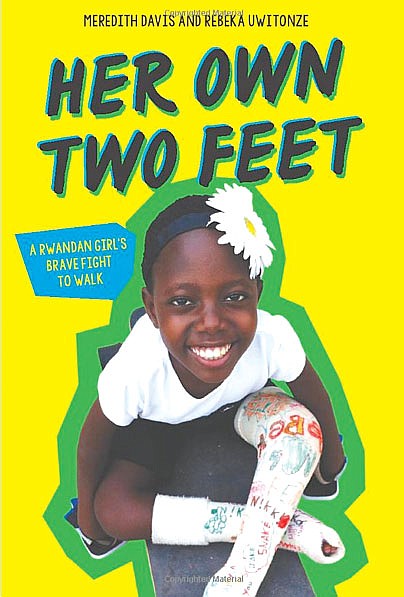 On the day you took your first steps, your parents were very proud.

They took pictures of you standing by yourself with a one-tooth smile on your face, and then they called grandma and grandpa to tell them you were walking! It was reason to celebrate and you walk now without thinking about it, but in the new book “Her Own Two Feet” by Meredith Davis and Rebekah Uwitonze (2019, Scholastic), first steps aren’t always second nature.

One thing was for sure: Rebekah Uwitonze was independent.

Born with her feet twisted sideways and backward, her shoulders stiff, and her middle fingers bent to her palms, Rebekah never let her problems stop her from anything. She could feed herself—she wasn’t a baby—and though it took awhile to figure out how to quickly reach the bathroom a few feet from her back door, she otherwise got around just fine.

So what if she crawled, or lurched about on the tops of her feet?  So what if folks in her Rwandan village told her parents to let her die when she was born? So what if some people said she was “cursed”? As long as Rebekah stayed strong and smart and loved, her feet and her hands weren’t important.

Yes, she’d seen doctors: when she was small, they tried to turn her feet but it hurt a lot. It didn’t work, either, nor did a second attempt, so when a White stranger came to her parents’ home and offered to take Rebekah to America to fix her feet, she was afraid. She remembered being left at the hospital, and how much it hurt. Still, as Papa said, “Chance comes once” and so Rebekah went with a translator on her first airplane trip from one continent to another.

But Bugesara, Rwanda was nothing like Austin, Texas. In Texas, dogs are allowed in the house and on the bed. There were new foods to try, a trampoline to play on, and new holidays to experience. Rebekah learned English, made new friends, and ate French fries while her surgeries healed and she learned to walk again.

But then it was time to leave Texas and go home. Was she ready for it?

Some days, nothing goes your child’s way. From the moment she wakes up until the second she shuts her eyes, it’s one thing after another but this is for sure: Have them read “Her Own Two Feet,” and things will fall into perspective.

Beaming strength from every page, authors Meredith Davis (the matriarch of the Texas host family) and Rebekah Uwitonze tell the latter’s story in a matter-of-fact way that elicits compassion without begging for it. That gives readers a chance to quietly observe Uwitonze’s determination, practicality, and her sheer bravery in a quest to overcome a disability. Without being a spoiler, this will leave your child cheering.

“Chance comes once,” as Uwitonze’s Papa said, so seize it and find “Her Own Two Feet.” If your 8-to-12-year-old wants a good biography or a tale of gratefulness, having it is the first step.