Wildfires have made LA County air quality among worst in nation

Vast stretches of California are burning 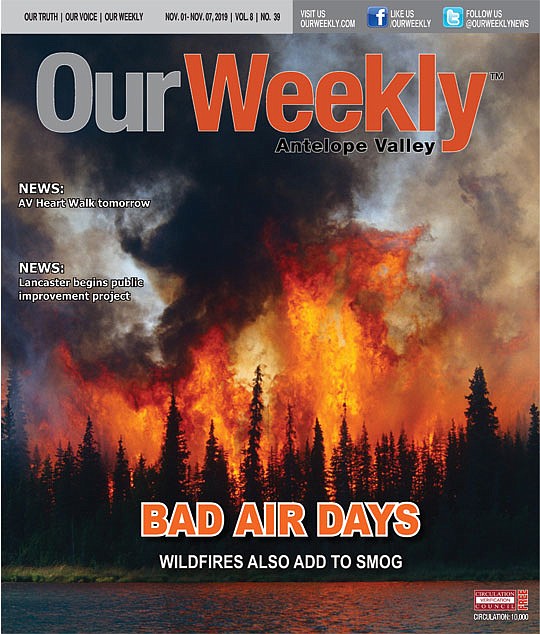 Los Angeles County and surrounding areas once again have the nation’s worst air quality. That’s the recent finding by the American Lung Association (ALA), which released a report stating that the five-county Los Angeles region ranks as the nation’s smoggiest metro area for the 19th time in 20 years.

Air quality has certainly improved since the “pre-catalytic converter” days when the nation’s vehicles operated on leaded gas. In fact, air quality has improved across the nation for the past 50 years. However, the ALA report demonstrates that—between 2016-2018—air quality in the Southern California region has deteriorated. Climate change and wildfires are cited as key causes for the downturn.

The report looked at the region county-by-county, and found that San Bernardo, Riverside and Los Angeles rank first, second and third respectively for having the worst smog in the nation or, as the State Air Report terms it, “ozone pollution.” Orange County received a failing grade as well, tied for 25th worst among the nation’s 3,007 counties.

California is home to 20 of the 26 smoggiest counties, despite the Golden State having the nation’s strictest vehicle emissions regulations. The number of unhealthy “high-ozone” days finds San Bernardino County with 161.2 unhealthy-air days, Riverside County at 130 days, and Los Angeles County at 119.2 days when it is certifiably unhealthy to engage in prolonged and/or strenuous outside activities.

The ongoing fight against climate change has only been exacerbated by the wildfires that are plaguing the state from the Wine County (Kincade Fire), down to our local mountains and canyons (Getty Fire), as well as the Calabasas Fire, the Tick Fire in Santa Clarita, and the Easy Fire that burned more than 1,700 acres and threatened the Ronald Reagan Presidential Library in Simi Valley.

California was particularly hard hit by blazes in 2018 and continuing through this year as “fire season” has become a year-round concern. The warmer temperatures resulting from the drought have increased the likelihood of wildfires and resulting bad air quality. Near gale-force winds passing through Acton this week have contributed to these and more wildfires.

“The three years covered in this report ranked as the hottest years on record globally,” according to the ALA report, which analyzed government data. “High ozone days and spikes in particle pollution zoomed, putting millions more people at risk and challenges to the work cities are doing across the nation [to clean up the atmosphere].”

A busy week for Cal Fire

The report, of course, covers the period of the devastating Thomas (2017) and Woolsey (2018) fires. This week, Cal Fire announced that it had fought 324 fires statewide within a 24-hour period.

Despite the addition of light rail passenger lines, more carpools, the use of special gasoline blends, encouraging zero-emissions vehicles, and the encouragement to ditch the car for nearby errands, the sheer volume of cars, trucks and buses—particularly in Los Angeles County—is the primary reason there has been little change in better air locally. The ALA has admitted that California “...has made tremendous strides” in improving the air we breathe, but “much more” must be done.