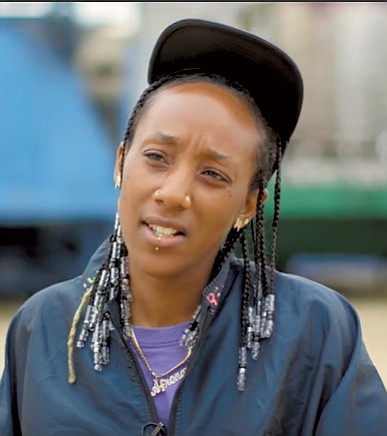 The shocking murder of rapper Nipsey Hussle two months ago reverberated around the world in less than 48 hours. While the music industry lost a Grammy-nominated artist, and South Los Angeles bid a sad farewell to an activist and mentor, artist Lauren Halsey saw that more work was at hand in memorializing the popular entertainer and favorite son of the Crenshaw Disrtrict.

On April 25, Halsey presented “Prototype Column for the Shaw (RIP the Honorable Ermias Nipsey Hussle Asghedom) I & II at Frieze New York. The work is composed of two 12-foot-high columns (two-feet wide in diameter) featuring hieroglyphic carvings in reference to Hussle’s familiar rap lyrics and the immense popularity of this musical genre not only in South Los Angeles but around the world.

Halsey’s project was selected from more than 100 international applications for the 2019 Frieze Artist Award contest for emerging artists commissioned by the Luma Foundation, a Swiss nonprofit organization that supports the work of independent contemporary artists who delve in a variety of mediums. What is unique about this artwork is that southlanders can expect to see it replicated sometime next year in the Crenshaw District. Halsey is in negotiations with the city of Los Angeles on a proposal that includes plans for a white mausoleum-type structure with seating and planters all covered in her contemporary form of hieroglyphics

“In my dream world, there would be 15 to 20 of these columns, anywhere from 30 feet tall and five to six feet in diameter,” Halsey said. “This would coexist with the permanent structure allowing visitors to move through freely like a corridor.”

Halsey was able work with the Frieze commission to experiment with a new durable industrial plaster that, while admittedly quite difficult to carve, allowed her to learn new techniques of design. Much of her interest in Egyptian hieroglyphs stemmed from her love of the funk groups Parliament-Funkadelic and Earth Wind and Fire who frequently used this form of art on their album covers.

“I’m really happy with results,” Halsey commented, “and now that I have the prototypes, I can share this with more fabricators around the country.”

Halsey, a Los Angeles native, is very familiar with the Crenshaw District. She was a huge fan of Hussle’s music which capitalized on a blend of driving rhythms and searing social commentary not always common in the rap industry. She said she specifically selected the use of hieroglyphics because of the historic beauty and inherent message of ancient Black society.

Halsey’s work lies primarily at the intersection of art, architecture, fantasy and community engagement. Her artwork—replete with immersive installations and site-specific projects—pay homage to the people and places that, she says, are important to her and which address the social justice issues which people of color, the LGBT community, and the working class are most concerned. Her fascination with ancient Egypt can be readily seen in practically all of her projects.

“It is the record of the pharaohs,” she said, “and I wanted to remix it into contemporary neighborhood poetics and news to describe this moment for people.”