Inglewood ‘wind of change’: Good or bad for community?

Residents fear being ‘priced out’ 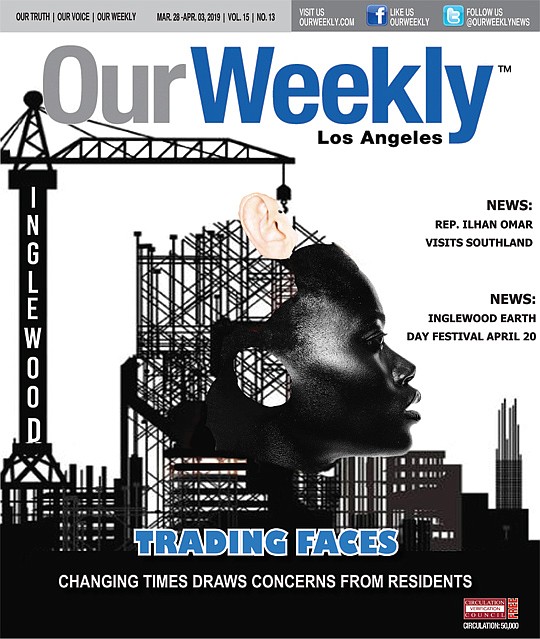 Inglewood, known to many as the mecca of local sports, hip hop culture, gang activity—and long-standing inequality—is receiving a wind of change. It could be considered a bigger storm for some by virtue of gentrification.

The term “gentrification” means, “The process of repairing and rebuilding homes and businesses in a deteriorating area—such as an urban neighborhood—accompanied by an influx of middle-class or affluent people and that often results in the displacement of earlier, usually poorer residents.”

Although cheaper than Hollywood, or Koreatown, for the community of Inglewood that already suffers from inequality issues, the price for housing is not affordable. According to rentcafe.com, Inglewood saw an increase of seven percent increase from 2018 to 2019. The average rent used to be $1,654 and is now by $1,770.

“We have heard many stories about businesses closing and moving out. Several shops on our block have closed in the four years we have been here,” said Renie Schoenkerman, owner of MiddleBar. “Hard to survive with rent increases. Our staff who lives in the neighborhood has had to contend with these issues as well.”

Looking back, Inglewood wasn’t always a predominantly Black or Latino neighborhood. In the 1940s up to the the late 1960s, Inglewood was a staunchly segregated White neighborhood. However, more African-Americans moved to the city, which resulted in the familiar “White flight” toward the suburbs. But with change, also comes hardships, such as poverty, high crime, and food deserts. But besides its issues, Inglewood was also considered the “Harlem of the West,” with its Jazz bars and entertainment that attracted various celebrities, such as Marilyn Monroe, and Rita Hayworth.

“Over the years the neighborhoods are changing and as more White folks move into Inglewood,” local resident and architect Christopher L. Mercier said. “It’s a funny flip on diversity as Inglewood gets more diverse. The hope is that this influx of new residents, and new businesses can quickly learn to grow into the existing culture this area has, and help to grow its positive aspects with minimal displacement.”

MiddleBar owners, Renie Schoenkerman and partner Corrie Scully, have been in Inglewood since 2014 and love its diversity. The power couple, that specializes in craft cocktails and hosts pop ups, looked for a place that offered space and affordable rent.

What they’re saying on Market Street

Scully, a New Orleans native, found similarities on Market Street that is the home to many southern comfort cooking.

“We were on the search for a commercial kitchen when we came across our space in Inglewood. It was so cute and we saw the potential on Market St, well before the announcement of the stadium and revitalization,” Scully said. “We just felt we could bring some good hospitality to this historic neighborhood”

Located at 129 N. Market St., MiddleBar’s mission is to grow with the change and serve the Black community, as well as the White community. But the increase of rent makes is hard for residents and business owners to stick around.

“One of our waitresses, an Inglewood resident, has seen a $500 hike in the last year alone,” Scully said. “Our rent increases at a rate of 5 percent per year and is set to go higher this year.”

Although gentrification can have a positive impact on a community, it could also backlash and hurt the people who have been there, their entire life. Business owners, and residents fear, the change and plan for the new stadium will push old residents—which are mostly Black and Latino—out of the area.

“As business owners, we see the changes as very positive for business and communities. Overall, the vision of the new Inglewood that Mayor [James T.] Butts is promoting will bring long lasting, positive change to the city,” Schoenkerman said. “As humanists, we see the greed of landowners who hike up prices and force people out of their homes as morally corrupt.”

Despite Inglewood’s gentrification process, it’s still not Disneyland. Crime rates are still high, according to city-data.com. But does this really keep White people away from this new prime real-estate?

“At MiddleBar, our goal is to create an excellent experience in Inglewood. An experience that residents will not have to travel to Culver City or Westchester to get,” Scully said. “We focus on music, food, drink, hospitality and service. We host local artists and chefs and rent our dining room for residents’ special events. MiddleBar on Market is a community-driven, community building business that brings people together to gather with loved ones, relax, and enjoy a precious moment on earth. We aim to promote happiness.”

An increase in tourism

The number of Whites moving into Inglewood is increasing dramatically. Businesses, such as Airbnb, have witnessed an increase of bookings via tourism. The so called “Jewel of the South Bay” might actually become the next Rodeo Drive, with the nearby plans of the makeover of the Baldwin Hills Crenshaw Plaza, investors see a new mecca of opportunities.

“I think gentrification in the Inglewood/Crenshaw area is a good thing,” Mercier said, “as long as it is bracketed to focus on the existing cultural condition of that area as an opportunity to inspire what re-gentrification is. How it include local business and local residents at the heart of its creation. Gentrification should be home grown and not transplanted if that makes any sense.”

And although hip, new places have moved to Inglewood’s busy shopping mile, Market Street, others have left. The change is sneaking up slowly, like a big, bad storm. Once the new stadium is built, things will happen quickly.

“I think there is a mixed response,” Mercier said. “Many realize the city needs the improvements and has for years. At the same time, there is tremendous fear, everyone is going to get pushed out. The recent approval of the rent control measure is a first step in helping to keep local residents in their homes. I think, more things like this need to be developed that in some form of help to mix incoming new residents with the existing, so that the notion of a truly diverse community can really develop here in a unique way. That I think is the real opportunity Inglewood has.”

Various media outlets have reported that Inglewood residents demand affordable housing, as well as the access to healthier food options, such as a weekly farmer’s market.

Earlier this month, Mayor James T. Butts, in support of the community, proposed an emergency ordinance to put a hold on rent increase for a 45-day period, while the city determines its next steps. With a unanimous 5-0 the vote, the emergency ordinance took full effect. It prevents landlords to raise rent more than 5 percent, and will prohibit the eviction of evict tenants for reasons other than criminal activities. However, as great as it sounds, the ordinance doesn’t count units built after 1995, including all single-family homes, condominiums, and hotels. If the city needs more time to decide, the council has the option to extend the ordinance for up to one year.

“It was clear that we have to figure out something that respects the property rights of owners but gives options to tenants that can’t afford a rental increase,” Butts said. “We’ll figure out a balance between that.”

Nevertheless, the Inglewood community could possibly see more job opportunities, then there are currently available..

“If gentrification can bring life to a community without forcing out the community then there is positivity. Good business, good jobs, good community,” Schoenkerman said. “It’s the greedy landlords I wish we could force out of town.”

But on Market Street, it isn’t all about “southern comfort,” but also culture, that is to be found at the nearby Residency Art Gallery at 310 E. Queen St. Owner Rick Garzon has mixed feelings about the current situation,

“I think Inglewood is already a great place to live, and has been for decades,” said Garzon, a 30-year Inglewood resident. “We would like to see more of the services that are offered in more affluent neighborhoods such as graffiti removal, better landscaping, more public art, all inclusive city-led engagement programming and etc.”

But there’s more going on than building a new sports stadium, projected to cost $4 billion. A little over four miles north, in the Baldwin Hills/Crenshaw neighborhood, the Baldwin Hills Crenshaw Plaza got approved for a third phase renovation project. One-tenth of the new units will be designated as “moderate income” housing for those with household earnings between roughly $51,000 and $77,000, according to city officials. However, the median household income of Inglewood is about $44,377 and the poverty rate is about 20.7 percent. The median household income in the Crenshaw District is a reported $40,042, which means majority of the local residents likely cannot afford the rent and may be forced to move to surrounding southeast neighborhoods.

Because Inglewood has so much potential to be a living, vibrant region of opportunity, help is needed for the city to reach its full potential. Architects such as Christopher L. Mercier are working on new ideas to make Inglewood more attractive. He has worked on the Guggenheim Museum Bilbao in Spain, among other architectural icons, and developed the idea of the “Inglewood Living City Project” a few years ago. A project, that would include green areas, and eco-friendly resources. Unfortunately, the idea has not found a home in the mayor office, just yet.

“The main piece of the puzzle is really about identity,” said Mercier who has resided in Inglewood since 2003. “What we think about an area is an environment we create in the mind, and that in turn supports an environment of the physical world and vice versa. Inglewood is already changing, the trick is to insure we all—new and old residents—support the existing local cultural icons and places of this community and help them to grow. Inglewood and the surrounding communities have some great and unique conditions that need to become recognized and celebrated even more as the cultural identity of the area shifts, so none of us loose the great pieces, places, and cultures that make Inglewood—’Inglewood.’”