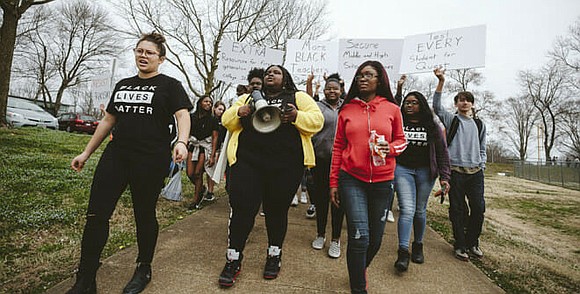 Students at Charlottesville High School in Charlottesville, Virginia, walked out of classes on Monday, issuing a list of demands to the school district days after they were targeted by a racist threat, reports the Huffington Post.

The walkout, organized by local activist and student Zyahna Bryant and the high school’s Black Student Union, was framed around pushing the school district for cultural reform and increased safety ― particularly salient concerns in a city where White supremacists held a large and deadly rally less than two years ago. By one estimate, some 200 people joined the Black Student Union and marched through McIntire Park in protest.

“There can be no reconciliation without redistribution of resources for Black and Brown students,” Bryant told HuffPost Monday afternoon. Students called for the school district to focus more resources on African-American history courses, hire more Black teachers, give its resource officers racial bias training and install a lock and buzzer system at high schools for safety, among other demands.

“In the wake of the recent school closings due to threats of racial violence that targeted Black and Brown students, the students of Charlottesville High School are calling on the Charlottesville City Schools to address racism in all its forms,” the Black Student Union said in a press release. On Thursday and Friday, public schools were closed citywide after a user on the message board 4chan threatened to commit “ethic cleansing” at Charlottesville High, using racial slurs and warning students to stay home.

Police tracked the post to a 17-yrear-old male in Albemarle County on Friday, and charged him with felony threats, as well as misdemeanor harassment. They didn’t identify him because he is a minor. The same day, another teen was arrested for an unrelated threat, also made on social media, against nearby Albemarle High School. Students in Charlottesville have seen their city made into a staging ground for racist action time and time again.

The deadly Unite the Right rally in 2017 ― which was falsely billed as a response to Bryant’s work to remove a Robert E. Lee statue from a public park ― wasn’t the first outbreak of racist violence in Charlottesville, nor the last. Last summer, near the anniversary of Unite the Right, HuffPost spoke with Bryant, who noted that racism and White supremacy didn’t just march through town ― it’s always been there.