Pop culture at The Broad 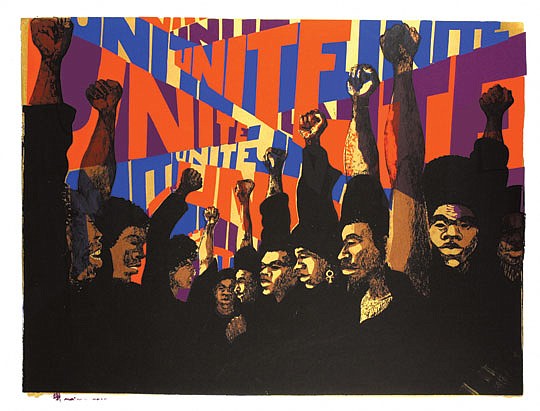 Since its opening in September 2015, The Broad Museum has been a boom to the city’s artistic footprint, and reflects a shift in the demographics of patrons to institutions of what has traditionally been called “high culture.” Figures kept by The Broad indicate that 66 percent of its visitors identify as non-White, with their median age over 10 years younger than the national average of museum-goers of 45 years. Its latest offering, “Soul of a Nation: Art in the Age of Black Power 1963-1983,” marks another milestone in the evolution of diversity in the Ccity of Angels.

“Soul of a Nation,” which opens on Saturday, focuses on two of the most pivotal decades in America’s brief history: 1963 through1983. Among the artists presented are Chicagoan Barbara Jones-Hogu, whose 1969 print “Unite (First State),” serves as the exhibit’s poster image (see above image). Included are Emory Douglas, Betye Saar, and Charles White, who spent his career working and teaching locally at Otis Art Institute. Concurrent with the opening is a symposium of artist conversations, and poetry at Little Tokyo’s Aratani Theatre (244 San Pedro St.), which is curated by professors Frank B. Wilderson III and Bridget R. Cooks of the University of California at Irvine. Among these events will be a conversation between Hollywood director Ava Duvernay and the Ford Foundation‘s Darren Walker, and a reading by Leimert Park poet Kamau Daáood.

Admission for this event is $20 ($15 for students), includes the main event at The Broad. The coming months will feature several museum openings showcasing artists of color. The previously mentioned Charles White is the subject of “Life Model: Charles White and his Students,” at the Charles White Elementary School, 2401 Wilshire Blvd. (formerly Otis Art Institute) through Sept. 14; and “Plumb Line: Charles White and the Contemporary,” through Aug. 19 at the California African American Museum (CAAM).

Cooks will also curate the upcoming “Ernie Barnes: A Retrospective,” which showcases the art and life of the NFL lineman turned painter, which runs May 8 through Sept. 8 at CAAM. All of these showings, with the possible exception of the Barnes exhibition, examine the interplay of art, politics, and social commentary. In the process they arguably reinvigorate the elitist images of the institutions that host them. In turn, the content on display are once again relevant to the masses, and advance the conversation about race in America, an exchange especially timely at this point in the millennium.