At St. Joseph Center in Venice 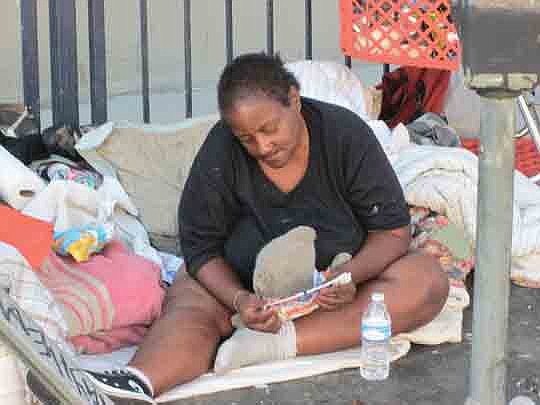 St. Joseph Center in Venice recently hosted a lunch panel discussion that addressed the community's request for more dialogue about structural, cultural, and economic challenges that have contributed to the homeless crisis among women in Los Angeles County.

On hand were Jacqueline Waggoner, a commissioner with the Los Angeles Homeless Services Authority; Molly Rysman, and Dhakshike Wickrema, each a deputy with the office of Supervisor Sheila Kuehl; Amy Perkins from the office of Mayor Eric Garcetti, Cheri Todoroff with the County Department of Health Services, and Karen Elzy with St. Joseph Center. The panel was moderated by Dr. Va Lecia Adams Kellum, president of St. Joseph Center.

The panel looked at the specific issues that women experiencing homelessness deal with daily. The discussion showcased various perspectives of the issue, including those from a formerly homeless woman who shared her firsthand perspective to experts, who in turn explained the larger factors that contribute to women falling into homelessness, and offered suggestions about what community members can do to help.

Karen Elzy, a single mother who experienced homelessness in 2010, told her story of how she struggled to find work after her business went under, despite having two master’s degrees.

“I left no stone unturned and did everything I could to find work and to provide shelter for my son,” Elzy said. Elzy turned to Codetalk, St. Joseph Center’s vocational program that provides low-income, and previously homeless women with the opportunity to learn coding, and web technology skills. She now serves as a graphic designer with St. Joseph Center.

Elzy’s story was followed by a discussion about why women are especially vulnerable to becoming homeless. Dhakshilke Wickrema, for instance, explained how systematic and cultural inequalities have led to homelessness disproportionately affecting Black, single women. She mentioned the average single woman on welfare receives about $500 monthly, well below what a person would need to cover the basic rent and necessities. Other panelists underscored how rent increases and an overwhelming lack of affordable housing contribute to the staggering increase in homelessness in L.A.—of which a disproportionate number are people of color. While 9 percent of the L.A. County population is Black, women of color comprise roughly 40 percent of the region’s homeless population. Institutional racism and pay inequality were common threads throughout the hour-long panel.

The discussion ended with questions from the audience. Many asked how members of community can get involved and make a difference. Waggoner provided the audience with three ideas that women in the community can do to advocate for the homeless: (1) tell a friend about what they learned at the panel; (2) say yes to crisis housing and affordable housing projects in your neighborhood; and (3) live with compassion and empathy for the homeless community with the knowledge of daily struggles homeless women face.

St. Joseph Center is an independent, non-profit 501 (c)(3), community-based organization whose mission is “to provide working poor families, as well as homeless men, women, and children of all ages, with the inner resources and tools to become productive, stable and self-supporting members of the community.”

The center serves more than 7,000 individuals annually across the Westside and in South Los Angeles through a variety of integrated programs. To learn more about St. Joseph Center’s comprehensive services, visit www.stjosephctr.org.