Los Angeles finds itself in daily battle with rats, disease 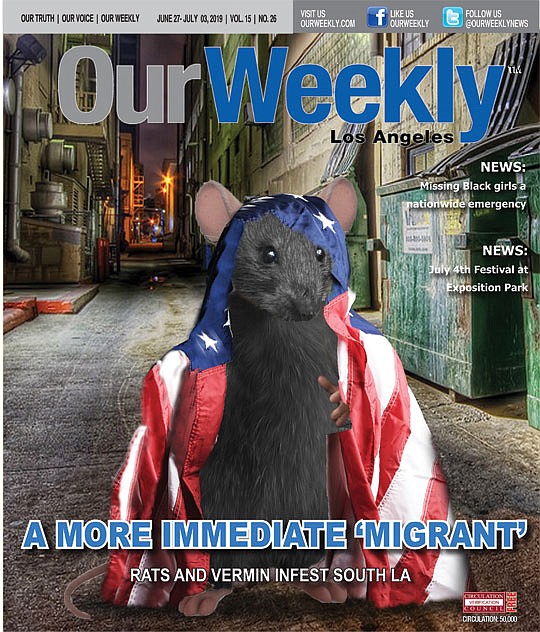 The city of Los Angeles has found itself battling diseases form the dark ages borne by both fleas and feces. An LAPD officer was diagnosed recently with typhoid fever (caused by a bacteria) along with two more colleagues displaying symptoms. Cases of typhus (from fleas), caused by a different bacterium, have soared in California from 13 in 2008 to 167 in 2018.

There have been outbreaks of hepatitis A, tuberculosis, and staph infections in Los Angeles and other West Coast cities.

A homeless individual, James Campbell, lives at the so-called “ground zero” (immediately south of Downtown Los Angeles) of the epidemic and describes how his environment is laden with waste, rotting food and the odor of open communal toilets

“At night rats dart through a maze of debris, and I fear the consequences of being bitten,” Campbell said. “Living with them causes me to worry about all those diseases that are resurfacing like typhoid fever, typhus, hepatitis, and tuberculosis. I have been living around rats so long I believe I understand them. I have observed them shrink in size to climb inside a concrete vault off the Harbor freeway. I have heard their squeals after dashing them with hot coffee. I have observed rats eating dog waste [while avoiding human waste].”

Rats and other vermin tend to consume fecal matter from animals rather than human waste, according to Dr. Robert Blanchard, a zoologist with the College of Social Sciences at the University of Hawaii. Blanchard focuses on bio-behavioral emotion systems—including aggression and defense—and the behavioral and physiological consequences of social stress. He believes homeless individuals are in harm’s way when living with rats, especially if the rodent is cornered or faces injury.

Rats will use the following defense mechanisms: vocalization—which consists of a hiss sound—followed by a jump or a stance on its hind legs. Often, a cornered rat will launch a “jump attack” for the face. Blanchard believes that while such attacks are rare, the city of Los Angeles should be more focused on the typhus which is transmitted by bites from fleas carried by rats and cats that serve as hosts.

Campbell keeps bleach, alcohol, trash bags and hand sanitizer in his homemade shelter. He regularly sprays a mixture of water and bleach around the perimeter of his shelter, thereby keeping himself and the area clean and disease free. He said this practice is a top priority he learned while incarcerated at the Men’s Central Jail in Downtown Los Angeles.

“ I was locked up in jail, during the flesh eating bacteria scare in 2005,” Campbell explained. “I noticed the Hispanics—who kept to themselves—had a designated toilet that they kept extremely clean. That toilet was only used to do laundry, a type of jailhouse wash machine. I saw them beat up other Hispanic inmates—those that had hygiene issues. Hygienic discipline was their protection against flesh eating bacteria. Filth breeds disease.”

Campbell said the homeless encampment he is in is breeding disease because it lacks “hygenic discipline.” He stays along the Harbor Freeway in South LA, and according to him, it is often littered with rotting food, needles, human and dog waste, trash and the stench of urine.

“We need communal response for cleanliness at a time when most people do not have access to private bathing facilities,” he said.

Los Angeles City Councilman Curren Price (Ninth District) is perplexed about how this health emergency has gone unnoticed for so long. In other words, how did the city practically “overnight” become the footprint of filth and typhus in some areas, and remain pristine in others?

“I understand Campbell’s frustration; we are literally hearing names of infectious diseases that ravaged populations in the Middle Ages, impacting individuals today in Los Angeles,” Price said. “These microorganisms are hitting homeless populations especially hard. Los Angeles recently experienced an outbreak of typhus, a disease spread by infected fleas on rats and other animals in downtown Los Angeles, briefly closing part of City Hall after reports that rodents had invaded the building.

“ Homelessness is a nationwide problem with a variety of contributing factors such as the economy, domestic violence, drug addiction and mental illness,” Price continued. “I believe there may have been other factors that created L.A.’s perfect storm of chronic homelessness and medieval disease.”

The infectious disease concern may be traced to a Supreme Court decision that ordered California to reduce its prison population to around 40,000. Because the state did not want to construct more prisons, Assembly Bill 109 was passed in 2011 and, in effect, would shift tens of thousands of inmates to county jails. This led to jail overcrowding, forcing the Los Angeles County Sheriff’s Department to release inmates—many of which were either addicted to drugs, or suffering from mental illness—onto the streets with no plan to assist them in day-to-day life.

Later, with California’s criminal justice system, still adjusting to the new law, two additional criminal justice reform measures were passed. Propositions 47 (2014) and 57 (2016). Proposition 47 downgraded dozens of theft and drug offenses to misdemeanors, virtually eliminating the threat of jail time for many offenders. The new policies would effectively undercut the effectiveness of the criminal justice system which had long struggled with jail overcrowding while trying to implement and encourage drug treatment strategies. With little threat of jail time, drug addicted offenders have little incentive to go through rehab.

Then two years after that, Prop. 57 redefined some felonies from violent offenses to nonviolent offenses , allowing still more offenders to be released. Many in law enforcement believe implementation of these three criminal justice changes in the span of five years (with little time to assess the effects the reform measures) are reasons why homelessness has recently soared and with it the marked increase in rodent infestation and infectious diseases.

“Instead of just dumping individuals on the street, I do believe we should have implemented additional options, such as resources tailored for the needs of the homeless with a focus on drug rehab and mental health, and a legal system that encourages compliance,” Price said. “More infrastructure should have been in place to assist those released and prevent a surge in homeless individuals. The release of nonviolent inmates may have contributed to individuals like Mr. Campbell being homeless, and we failed by not preparing for the release.”

Price reiterated that homelessness is a problem which exists largely because of mental illness, economics, drug addiction, and domestic violence. “Until we are able to eradicate these issues we will continue to deal with homelessness,” he said.

“The city will no longer rely solely on a case-by-case, complaint-driven model for cleanups,” Garcetti said. “Instead, [creating] neighborhood-based comprehensive cleaning and rapid engagement teams that will use data-driven tools to provide public health services to encampments, identify areas of highest need, and ensure that the hardest-hit areas receive regularly scheduled cleanups and hygiene services.”

Policy decisions notwithstanding, the city’s rat-infested, disease-ridden, and trash-filled streets can be traced the long-standing habits of littering and illegal dumping, particularly in South Los Angeles. The other day, this reporter observed a food truck employee remove from his truck a large aluminum box filled with trash. He slowly walked in the direction of an overfilled dumpster that appeared to not have been emptied in weeks. The man proceeded to lift the lid and deposit his garbage on top of an overflow pile of debris. He calmly walked back to the food truck without taking a second look.

It was then that a local merchant approached the person and informed him that he just made an illegal dump. He was also informed he is effectively “killing his business” because if the location became more filthy, the rat population would converge in the area and potential customers will refuse to purchase food from him.

His response was less than understanding. He later said that, prior to 2014, commercial waste removal was competitive. Some business owners paid about $960 a year for the service. City officials would reportedly implement a more cost-effective method to remove some traffic off of L.A.’s busy streets, and rather than have five or six different sanitation firms removing the trash from a business district (with each stopping on different days) what remains is a city-enforced monopoly, with one firm bidding for the right to remove trash in each of the 11 zones. The result has been fewer garbage truck trips and what some business owners say was an increase to about $3,600 in trash-hauling fees per year, representing a three-fold increase in cost to merchants.

But instead of paying more for their refuse removal, a few operators in L.A.’s food processing and manufacturing districts found an innovative solution: In exchange for not calling the police to remove the homeless squatting on their commercial property, business owners often ask these persons to carry their garbage away which results in garbage being dumped on the streets giving rise to growing health concerns