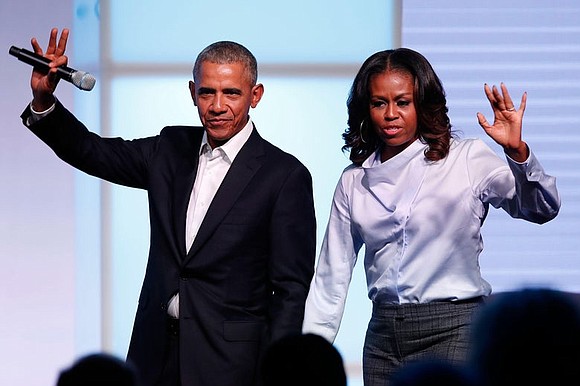 President Barack Obama and Michelle Obama have signed a deal with Spotify to produce a series of podcasts exclusively for the streaming platform, reports Variety. Under the multi-year deal Spotify and the Obamas’ Higher Ground Productions, the former first couple’s production company, the former first couple will develop, produce and lend their voices to select podcasts on a wide range of topics.

The agreement is with Higher Ground Audio, a new division of the Higher Ground production company. The Obamas formed Higher Ground last year, saying their goal is to foster new, diverse voices in the entertainment biz. The couple has a multi-year deal with Netflix to produce original scripted, unscripted and documentary series and films. Earlier this spring, HGP announced seven initial projects in development.

Spotify will distribute the Obamas’ podcasts worldwide to its paid and ad-supported user base. In the first quarter, Spotify said it had 100 million premium subscribers and more than 217 million monthly active users overall. “We’ve always believed in the value of entertaining, thought-provoking conversation,” President Obama said in a statement provided by Spotify. “It helps us build connections with each other and open ourselves up to new ideas. We’re excited about Higher Ground Audio because podcasts offer an extraordinary opportunity to foster productive dialogue, make people smile and make people think, and, hopefully, bring us all a little closer together.”

Added Michelle, “We’re thrilled to have the opportunity to amplify voices that are too often ignored or silenced altogether, and through Spotify, we can share those stories with the world. Our hope is that through compelling, inspirational storytelling, Higher Ground Audio will not only produce engaging podcasts, but help people connect emotionally and open up their minds — and their hearts.”

The companies didn’t provide details on specific projects the Obamas may be planning for Spotify at this point, including whether the podcasts will have an explicitly political focus. According to Spotify, the programming will encompass “a diverse slate of original podcasts.” Higher Ground’s initial Netflix slate includes a non-fiction series based on Michael Lewis’ “The Fifth Risk: Undoing Democracy,” a look at the transition to Donald Trump’s presidency through the lens of federal bureaucrats; a film adaptation of author David W. Blight’s biography “Frederick Douglass: Prophet of Freedom;” and “Bloom,” a period drama set in the post-WWII fashion world written and executive produced by Callie Khouri (“Nashville,” “Thelma and Louise”).