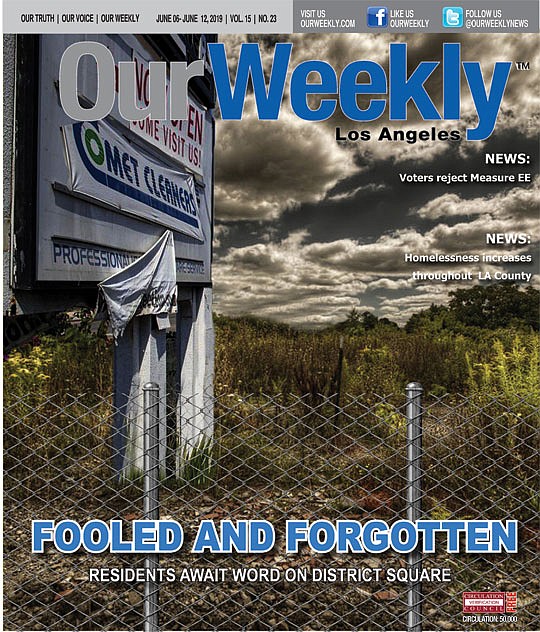 The Charles Company’s original design was to include both upper- and lower-level parking with access to retail stores (Target, Ross, Marshalls) on all levels, while the remaining space would be leased to various vendors and retailers. To date, none of this has materialized.

A brief overview of what went wrong stretches back to it’s beginning. In 2010, Los Angeles City Council President Herb Wesson (10th District) recognized the need to revitalize this part of South L.A. and was an enthusiastic supporter of the project. Officials would soon secure $26.2 million in federal grants and loans, but trouble began a few years later when the developers used only a fraction of that money after purchasing the land, moving out the existing businesses, and beginning the demolition process. The federal assistance would be repaid by the developers using tax revenue generated by the new shopping center—instead of flowing back to city coffers.

The original consortium of developers began to ask for more money. One of these persons was Arman Gabay, co-owner of the Charles Company, who would later become ensnared in a bribery scandal. Then Target Corp. dropped out of it’s proposal to open a store. Wesson would offer to lend another $6 million toward the project called a “float loan” to keep construction on track. Because the project did not have sufficient tax credits needed for financing, Jan Perry, a former city councilwoman who once ran the Economic Workforce Development Department (EWDD), in 2015 issued the first of several default notices stating that the deadline for construction had passed.

In 2015, Wesson wanted to revive the project contingent on Perry’s halt of the default proceedings. At the time, Home Depot had placed its hat in the ring as an anchor store. Perry wouldn’t budge, telling Wesson that the EWDD had several discussions with the developers about repayment of money used so far. It was then that Wesson suggested that the city could pay off the loan’s $2.1 million balance by using federal funds not needed for another proposed development in the city.

Federal officials responded in 2016 that $1.9 million needed to be returned because the project was to be completed and operating in 2016. After a series of default notices issued by Perry, things have been at a standstill since then.

Wesson wants the developer gone. Unsatisfied with the proposed two-story design, a much larger seven-story tower has been proposed. Perry has since pushed to foreclose on the entire land parcel, but Wesson and Mayor Eric Garcetti have opposed such action. Garcetti wants to work with a new developer on a redesigned project composed of 573 apartments but less retail space. The city Planning Department has yet to grant approval to the new design. “The developer should get out of the way so the city or another developer can deliver a mixed-use project the community wants and expects,” according to a spokesperson for Wesson’s office.

Determined to see it through

Through a spokesman, Wesson has indicated that while he believes in the necessity of the development, he is beginning to lose patience with all of the delays. As late as last year, a consultant for the developers insisted they are pushing ahead with the plan despite years of broken promises to nearby residents. They contacted Wesson: “Let me state for the record, there has never been any intention to deceive, delay or misrepresent your office or the community as to our development plans and timing for the District Square development.”