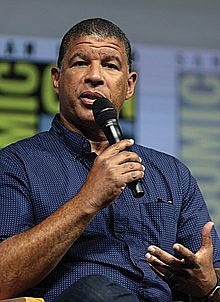 Peter Ramsey, the first Black nominee for the Best Animated Feature film at the 2019 Oscars recalls with Our Weekly the journey from the Crenshaw District to Hollywood as a “twisty road” that required him to change direction as he learned more about himself.

Question: When did art become your language of expression?

Answer: “From as early as I could remember. I didn’t realize that it was art at the time, but I was a very small kid and my Mom was at home with us; I had a younger brother and sister, so I was the oldest. And I would draw to entertain myself. It was something to do… I’d grab one of her magazines and a ballpoint pen and start scribbling in the margins and, you know, draw little characters and make up little stories.”

Q: What specific to your upbringing in a majority Black community still serves you?

A: “The grounding. My parents were really down to earth. There was no pretense about class or money. I never felt poor or deprived. I’d never really felt that I was missing out that way. Those kinds of luxuries be it brand names or anything like that. Those types of status symbols, they didn’t mean much to me because I grew up with that sort of ethos.’

Q: How did you decide to pursue art as a career?

A: “It’s not something that you get educated about in school. I grew up in L.A. 10 miles from Hollywood. I had no idea that I could make a living in the film industry... until I was in my 20s. It had never entered my mind that a normal person like me could work in the movie business. I had been at UCLA as a freshman in the fine arts program—17 years old—and I was confronted with a way of thinking about art that I had never had before. I identified myself as an artist, and suddenly I was finding out that, ‘oh, this thing that I think I am, I don’t really know if I am! If this is it, then I don’t think I’m it.’ But it was also a great thing because it made me sort of realize that the thing that interested me about art was how it fit a narrative.”

Q: Are looking for ways to get the children in the Crenshaw district to channel their art?’

A: “I would love to do that. I would love to create the opportunity so people can channel their art in Crenshaw specifically with kids at an earlier stage. The sooner that you can get concretely the idea of what to do, what you like to do, the sooner you can concretely get some sort of context for kids who have this creative drive and don’t really know what the right outlet is or what the possibilities are.”

Q: In some neighborhoods, art classes are only affordable if they are free. What advice do you offer to artists who can’t afford classes?