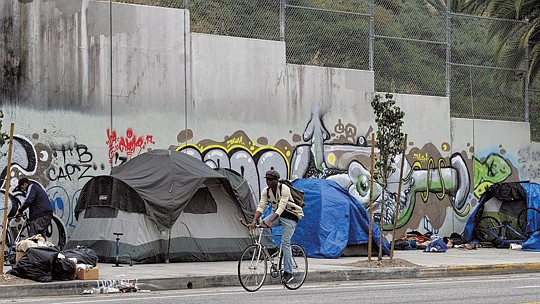 Los Angeles Mayor Eric Garcetti announced this week that the city will receive about $124 million in state funding this year to help address its homelessness problem—a substantial increase from last year’s allocation but far from the billions previously requested.

“We all know that homelessness is perhaps the most complicated issue that we’ll confront in our lifetime,” Garcetti said during a news conference at the Homelessness Response Center downtown. “We asked for $2 billion, but you always ask for what you need, but you get what you get. And we’re not upset, we’re actually quite pleased.”

The state allocated about $257 million for cities to address homelessness this year. Garcetti said about half of the $124 million earmarked for Los Angeles will go to the city’s interim housing program and shelters; $9 million will be put into alternative housing models including shared housing; and $7 million will go to addressing issues on Skid Row. Another $14 million will go toward prevention efforts, such as the eviction defense program and emergency rental assistance. Funding will also go to assisting homeless youth.

“If we can reduce the duration of (a) first homeless experience, we will prevent that family from becoming chronically homeless over time,” said State Sen. Holly Mitchell (30th District), who chairs the senate Committee on Budget and Fiscal Review. Mitchell was key to securing the funding Los Angeles received this year, Garcetti said.

Los Angeles received about $85 million last year in homeless funding from the state.

The city has already allocated more than $460 million toward addressing homelessness in this year’s municipal budget, along with other funding for housing and cleanup services. More funding was allocated for CARE and CARE-plus teams, which will conduct cleanups and outreach at homeless encampments starting this fall.

Thousands of homeless people were contacted by city-appointed service workers in June and hundreds of cleanups took place, the mayor said. Garcetti said that’s about 16,000 people a year. Los Angeles has more than 36,000 homeless people—a 16-percent rise from last year, according to the latest homeless count.

Assemblyman Miguel Santiago, D-Los Angeles, said a bill has been introduced in Sacramento aimed at streamlining funding for shelters and thehomeless.

“This year, we rolled up our sleeves. We would have wanted more (money), but we fought hard to get a better percentage,” Santiago said. “I think we recognize that homelessness is an issue of biblical proportions. It’s spreading across the country, and the numbers upticked here in Los Angeles.”

Garcetti said 1,900 beds at temporary shelters will be available by the end of next year, with three new shelters set to open by the end of the summer.

The mayor said 76,000 people have been transferred to permanent housing since 2014, but as the numbers from the latest homeless count indicated, more people are ending up on the streets faster than they’re being housed.

“This is the most vexing issue that I have ever dealt with,” City Council President Herb Wesson said. “In order for us to be successful, every level of government is going to have to come together and put people first. We will do our very best to spend this money wisely.”

City Councilman Mitch O’Farrell was in Sacramento Monday to meet with the governor’s office and several state lawmakers to discuss his recent request of $1.2 billion from the state, which would match the city’s commitment from the 10-year, voter-approved bond, Prop HHH, that passed in 2016.

According to his office, O’Farrell plans to meet with members of the governor’s office and Assembly members Santiago, Richard Bloom of West Los Angeles and Adrin Nazarian of the San Fernando Valley.

O’Farrell recently announced a plan to host the city’s first Summit on Poverty that would bring together service providers, local businesses and large corporations to collaborate on ways to prevent homelessness. The summit is being scheduled for the fall.

A federal bill has been introduced by Rep. Maxine Waters (CA-43) that would allocate $13.27 billion to address homelessness nationwide.