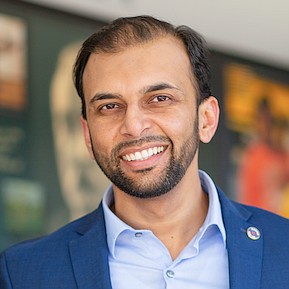 Prosecutors say that when Joseph Cecil Vandevere decided in March 2018 to anonymously tweet a graphic image of a lynching to the Muslim candidate, he was actually using interstate communication to transmit a threat ― a felony. An arrest warrant for Vandevere was issued on June 21. Vandevere could face up to five years in prison for the charge, according to the Associated Press. Qasim Rashid, the 36-year-old Muslim lawyer targeted by the tweet, told HuffPost over email that he hopes the federal action will show extremists ― and social media organizations ― that calls to violence have “no place in the public discourse nor in any civilized society.

Differences of opinion strengthen our society and free speech is a sacred right to ensure our society continues to advance. Death threats, however, are the anti-thesis of free speech and progress, and extremists must be held accountable for engaging in such reprehensible behavior.” Rashid, who won a Democratic primary for a seat in Virginia’s Senate last month, said he regularly receives threats on social media. He said he reports all threatening tweets he receives to Twitter and to the FBI. This is the first time one of these reports has resulted in a criminal charge.

“Unfortunately, death threats have been a part of essentially my entire online social media experience,” Rashid said. He first noticed Vandevere’s tweet in March 2018. It had been sent from an anonymous account, @DaDUTCHMAN5. The tweet included discriminatory language about Muslims and a graphic picture of a lynching. “Let’s meet so you can run that coward mouth to my face,” the tweet read in part. “View your destiny.”

The picture is believed to be of Leo Frank, a Jewish factory manager who was convicted of a crime he didn’t commit, kidnapped from prison and lynched by a mob in 1915. Rashid posted a screenshot of the anonymous tweet to his own Twitter account, writing, “Hey @twitter this White supremacist @DaDUTCHMAN5 is threatening me with lynching b/c I am a Muslim. Please tell me this violates your terms & conditions? #WhereWasHeRadicalized?”

Twitter has suspended @DaDUTCHMAN5′s account. Last week, Rashid told his Twitter followers that the anti-Semitism that killed Frank in 1915 and the anti-Muslim hate that prompted Vandevere’s tweet are “two sides of the same coin.” Frank’s murder eventually led to the formation of the Jewish civil rights group the Anti-Defamation League. Rashid said that he believes death threats are not free speech and should be prosecuted as incitement to violence.