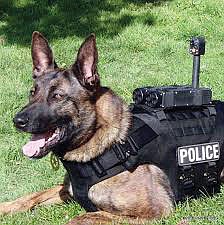 It looks like police and private security aren’t getting the message that they can’t get away with mistreating people of color anymore. The latest example of racism comes from Mobile, Alabama. The attorney for a group of five African Americans plans to file a lawsuit after the youths said they were racially profiled, handcuffed and one bitten by a dog while shopping at a mall in Mobile, Alabama, reports NBC News.

Attorney L. Chris Stewart said at a news conference Monday that the youths, who range in age from 15 to 20, were at the Shoppes at Bel Air late last month to buy clothes for the Fourth of July holiday when they were approached by a mall security K-9 officer. Stewart said the officer, who is employed by the security company Allied Universal, got out of his car with his hand on his gun and immediately went “into attack mode.” The officer shoved “the boys against the wall” and handcuffed them as officers with the Mobile Police Department arrived to provide backup, Stewart said.

Allied Universal said in a statement that its security officer and an officer with the Mobile Police Department were responding to a report of “a fight in progress at the mall’s entrance.” “We assisted the Mobile police officer in helping to detain an individual who was uncooperative and physically resisted police orders,” a spokesperson for the company said. Stewart said the group was playing around and chasing each other “like every other teenager” does.

According to Stewart, when Cameron Robinson, 16, accused officers of racial profiling, the mall security officer grabbed him by the neck and slammed him on his head. The officer then let his K-9 out of the car and the dog attacked Robinson, biting him on the arm. Stewart said the teen also suffered a head injury from being slammed. “The Mall at Bel Air tried to kill five young boys mentally, and one physically,” Stewart told reporters. Attorney Justin Miller, who is also representing the teens, compared the use of the K-9 to when police officers used dogs to attack African Americans during the Civil Rights era.

A spokesperson for the police department told NBC News on Tuesday that they are conducting an investigation into the use of force because the mall security officer used his K-9. They will also review the mall’s security policy and procedures. Robinson was charged with disorderly conduct, resisting arrest and possession of marijuana after officers found weed in his pocket, the spokesperson said. Nathaniel Henderson, 20, who was chaperoning the group, was charged with disorderly conduct. The other teenagers involved were released to their parents with petitions forthcoming, the spokesperson said.