‘Blended’ looks at world through eyes of a ‘tween’

Inside the head of a pre-teen girl 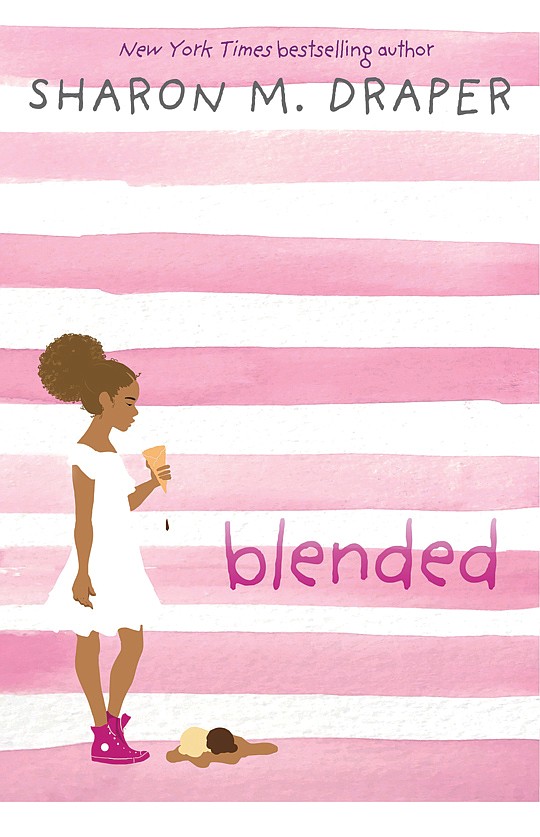 One plus one is two.

It’s simple: all you have to do is add or count, easy-peasy, a trick you probably learned shortly after you could talk. One plus one is two but as you grow up, you’ll notice that math can get funny and, in the case of the new book “Blended” by Sharon M. Draper (Atheneum Books for Young Readers, 2018), one plus one might suddenly become more.

It’s not like she’s rich or anything. It’s true, though, that one house is like a mansion and the other is really small, but the first one is her dad’s house and the second belongs to her mom. Isabella has a bedroom in each home because her parents got divorced when she was a little kid and it’s been a mess ever since.

What she doesn’t like: the “slicing in half every seven days” thing when her parents exchange custody at the mall. Ugh. What she loves: her tall, funny, cocoa-skinned dad who bought her a baby grand because Isabella is obsessed with playing piano; and her beautiful, blonde mother, who noticed Isabella’s talent back when Izzy was almost still a baby. Isabella would never choose between parents but sometimes, standing with one foot in two homes, between two races, is really, really hard.

Her friends are super-understanding and her parents’ friends are cool. Her BFFs, Heather and Imani, let Isabella vent. Her mom’s boyfriend, John Mark, has sunburned skin, tats, and a big truck and he makes mom happy. Anastasia, Isabella’s dd’s “lady friend” is elegant and sweet and Isabella likes Darren, Anastasia’s college-age son. So it’s not like she doesn’t have people who love her, right?

But when you’re eleven years old, there’s a lot to figure out. Other kids can be jerks at school, and do dumb things. Adults can do equally stupid things by making decisions without asking the kids who are impacted. Racial issues occur, even when they definitely shouldn’t. And when bad things happen to good kids, it’s nice to know who you can always count on.

It can be assumed that author Sharon M. Draper was a little girl, once upon a time. Can we assume she remembers it keenly?  Because in “Blended,” she taps perfectly into the emotions and the figuring-it-out period that almost-teenagers endure today.

In getting inside the head of a pre-teen girl, Draper presents a great young character that happens to hate drama. Still, Isabella is a typical kid with bashful boy-crazy moments and fierce-girl classmate conflicts, but her forthrightness and willingness to ask for help could be a boon for any “blended” child in similar situations. Parents might also appreciate that many of Draper’s characters are not assigned a race, which subtly puts the emphasis of much of the plot on the action rather than on the color of skin.

Meant purely for young readers age 9-to-12, this middle-grade book is fun, profanity-free, and relevant now. Give it to the girl who needs a sharp story; for her, “Blended” is a good one.