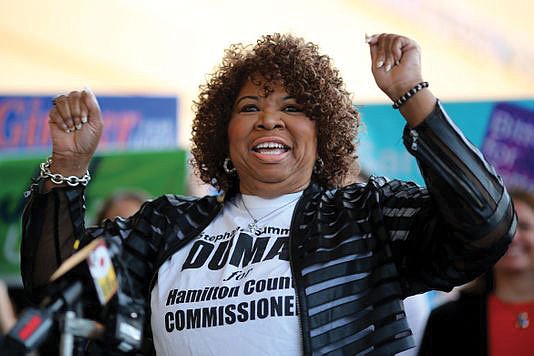 For the first time in history, an African-American woman is on the Hamilton County Commission, which serves much of Cincinnati, reports WLWT.com. Stephanie Summerow Dumas took the oath of office Tuesday (Jan. 8), ushering in a new era. “This is the year of the woman,” said Judge Ted Berry.

For Dumas, it’s been a long time coming. “It’s just my time, my season, and so I took charge of my time and I walked into my destiny,” Dumas said.

The scales also tipped for the first time in history with three Democrats, two women and the first female president on the commission. “Sometimes women lead the way in a unique way and I’m looking forward to that opportunity as the president of the commission to lead the way with Commissioner Dumas and also Commissioner Portune,” said Commission President Denise Driehaus. Dumas says she is now ready for work, and is putting the county budget at the top of her to-do list.

“Make me accountable. Ask questions. Come see me. Make an appointment, but come see and let me know if I’m answering your questions or I’m not dealing with the issues you’re interested in, because everyone is important,” Dumas. Said Dumas has previously served as mayor of Forest Park, administrator of Lincoln Heights, and she is a licensed social worker.