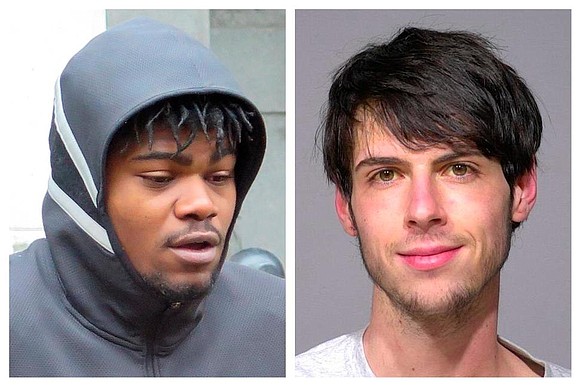 That afternoon, he and a friend had gone to a house in the neighborhood to confront someone with whom Smith had a problem. Police later said Smith and his friend were looking for a fight, and after a brawl ensued with several others, Smith left to get a gun. When an officer approached him to ask about the fight, he ran away and took to the roof. A handful of officers below were yelling commands, telling him to put his hands up because they had him surrounded. Two officers stood on the stairs leading up to the garage’s roof. When Finkley and Stahl approached, Finkley asked: “He got the gun in his hand?” “He doesn’t’ have a gun in his hand, but he was hiding behind the AC unit,” an officer responded.

The tip that Smith had a gun came from the people he’d been fighting. Finkley and Stahl climbed to the roof with their guns trained on Smith and joined the chorus of officers yelling commands. Smith briefly extended his arms just above his waist to show his empty hands, palms out, then began crouching slowly to the ground. That’s when the two officers fired three shots, with one bullet grazing Smith’s head and the others striking his abdomen. “I’m going to die!” Smith wailed in agony, on the ground. “I didn’t do nothing.”

The encounter lasted about 10 seconds. No gun was found. Smith survived, but his right leg is partially paralyzed and he needs a cane to walk. He wasn’t charged with a crime and has a pending federal lawsuit against the police, alleging officers acted “with deliberate indifference.” “I had my hands up. It’s on them,” Smith said at a recent news conference. “Everybody scared of the police, every Black man that’s from around” the neighborhood where the shooting occurred, he said. But the Milwaukee district attorney’s office reviewed Smith’s shooting and concluded the officers’ actions were justified because they “reasonably believed” Smith was armed, based on information from dispatch, and they thought he might reach for a gun behind the air conditioning unit.

Milwaukee Police Chief Alfonso Morales said people need to consider “the totality of the circumstances” when an officer is involved in a shooting. He said officers are under stress and taking in a lot of information — from what they are told while responding to a call to their own observations — and they have to make sense of it all in seconds. “I’ve been involved in these things. And I can tell you, in the incidents I’ve been involved in more than once, when it happened, my body just did it. ... There are things that are instinctual after you do it over and over again,” Morales said, at a Dec. 6 meeting of the Milwaukee Common Council.

This shooting was recorded in its entirety by Stahl’s body camera. Experts who viewed the video at the request of the Associated Press were not in agreement on what it revealed, though they acknowledged that there was little in it that justified the shooting. Jeff Noble, an officer for 30 years who’s now a law enforcement consultant, said he saw no “immediate threat” posed by Smith but echoed Morales’ wariness of criticizing the officers ‘reactions, if only because the camera did not capture everything the officers saw: “I have the luxury of sitting here in my office watching this and playing it back multiple times.”

Kevin Cokley, a psychology professor and director of the Institute for Urban Policy Research & Analysis at the University of Texas at Austin, was unequivocal: “This was not a justified shooting.” Smith didn’t exactly follow the officers’ commands to keep his hands up, Cokley said, but he also didn’t make a move toward his pocket or waistband and police already had a tactical advantage with their guns pointed at him. Cokley, who has written op-eds about police shootings of unarmed Black men, said, “Reactions based on fear within the context of policing are often driven by implicit bias. Black males are viewed as more dangerous, even in instances when they pose no danger.”