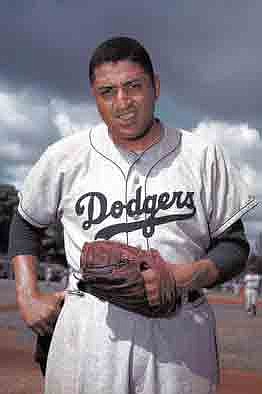 All time Dodger great Don Newcombe is dead at 92. He expired on the morning of Feb. 19 of undisclosed causes. A bridge between the transition from the Dodgers’ origins in Brooklyn, NY to their present stadium in Los Angeles’ Chavez Ravine, he achieved baseball’s Triple Crown as Rookie of the Year (1949), Most Valuable Player (1956), and Cy Young winner (also 1956).

A New Jersey native, Newcombe was a commanding six foot four-inch right-hander with exceptional batting skills for a pitcher. Starting with the Newark Eagles in the old Negro League, he moved to the Dodger farm system before rising to the majors in the footsteps of Roy Campanella and Jackie Robinson as they integrated baseball. Newcombe immediately became a star, with a 19-11 record in 1950 (as the Rookie of the Year), followed by 20 wins and nine losses the next season.

The Korean War interrupted this auspicious beginning, and he was inducted into the army for a two-year commitment before he could return to baseball. He didn’t immediately return to his old form, but the following year he came back with a vengeance. During the Dodgers 1955 World Series season, Newcombe finished with a 20-5 record, a 3.20 ERA, and seven home runs. He followed with an even more remarkable season, in which he simultaneously won both the Cy Young Award (the first year it was given) and the Most Valuable Player. To date, Newcombe and current Houston Astro Justin Verlander are the only players to have won these, and the Rookie of the Year awards.

After a brilliant 1956 performance with an amazing 27 wins, the rest of the 1950s saw a decline for this stellar talent, possibly as a result of his heavy drinking, traced back to his childhood. By 1958, he was traded first to the Cincinnati Reds, then onto the Cleveland Indians where he finished his major league career. He played briefly in Japan for a single season.

Through sheer force of will, Newcombe quit drinking cold turkey in 1966. Returning to the Dodger organization in 1970, he became an elder statesman in community affairs, and as an advisor to the front office. Don Newcombe assumed the mantel of substance abuse advocate; helping athletes like fellow Dodgers Maury Wills and the late Bob Welch vanquish their addictions, along with military personnel and those in the general public.

In striving towards these goals, he was active with the National Clearinghouse for Alcohol Information and National Council on Alcoholism, among other entities.

“What I have done after my baseball career and being able to help people with their lives and getting their lives back on track and they become human beings again—means more to me than all the things I did in baseball.”

Newcombe is survived by his wife Karen, two sons and a daughter, his stepson, and two grandchildren.