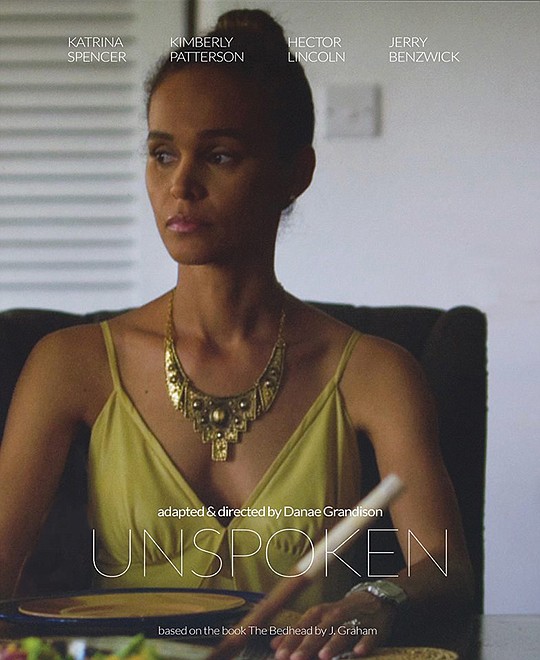 At first glance, Danae Grandison could be mistaken for a movie starlet. The former beauty queen (Miss Jamaica USA, 1997) is making her mark behind the camera, however. Her second short as a director, “Unspoken,” is making its Los Angeles premiere at this year’s Pan African Film Festival.

The native Caribbean came to film making in a round about way. Bouncing between her homeland and the United States, noticed the difference in the production values of American television commercials and thosedone in Jamaica, instilling in her a wish to someday elevate the quality of island production to that of their neighbors to the north. After attending New York’s Fashion Institute of Technology, she toiled in the advertising and design industry for years until she reached an impasse. Juggling the choice of continuing as a freelancer, or incorporating herself into a formal business entity, she had a chance conversation with a pastor, who suggested she return to school as a film student. In due course, she obtained a Masters in Film, while plunging into the world of independent movie making.

Grandison credits her background in graphic design for her largely visual approach to the film-making process.The genesis for “Unspoken” was planted by a Christmas gift in the form of a novel, “The Bed Head” by Jennifer Grahame. The process of working her way through its pages conjured visual imagery of this provocativetale of class friction, dysfunction, and infidelity among the affluent upper crust in the hills above Kingston, Jamaica.

At 12 minutes long, “Unspoken” is an adaptation of two of “The Bed Head’s” 18 chapters. Grandison’s interpretation of the book is impacted by the unwritten tradition of wealthy Jamaican men (sexually) exploiting their female servants, a practice going back to that island nation’s colonial era. Growing up on the island, she became more aware of this as an adult, since these issues were/are not a subject commonly brought up in polite discussion.

In Grandison’s words “It’s not a veranda conversation-it’s more of a whisper.” Comparing and contrasting the differences between her native and adopted countries, she acknowledges the overriding racial divide that is a hallmark of the American experience, a condition present in Jamaica, albeit on a different scale.

As Grandison notes, in her homeland “…class distinction trumps race.”

The synopsis briefly has a wealthy husband (Hector Lincoln) finding solace from the stifling Kingston heat with the charms of his sultry servant and mistress (Kimberly Patterson, to the chagrin of his pregnant wife (Katrina Spencer). Within the context of a dozen minutes, Grandison establishes a convoluted love triangle, with Patterson sandwiched between the carnal demands of Lincoln and the vindictiveness of the scorned Spencer.

In the works is a feature expansion of “The Bed Head’s” 16 other chapters. Grandison hopes to use her film making talents to craft more stories to showcase the unique cultural heritage of her homeland.