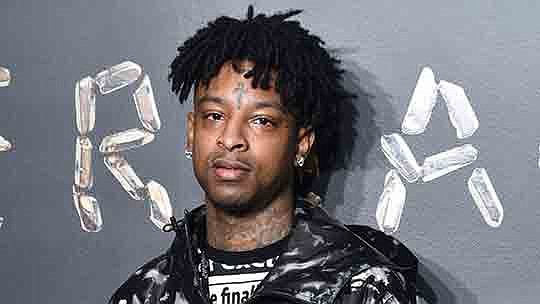 Rapper 21 Savage, who was nominated for two Grammys, was unable to attend music’s biggest night because he was locked up by ICE (Immigration and Customs Enforcement) for a visa violation. On Tuesday, the hip-hop artist was released on bond, reports several news sources. Next is a hearing that could possibly see 21 Savage deported. “For the past 9 long days, we, on behalf of She’yaa Bin Abraham-Joseph, known to the world as 21 Savage, have been speaking with ICE to both clarify his actual legal standing, his eligibility for bond, and provide evidence of his extraordinary contributions to his community and society,” said his attorneys in a joint statement. “In the last 24 hours, in the wake of the Grammy Awards at which he was scheduled to attend and perform, we received notice that She’yaa was granted an expedited hearing. Today, 21 Savage was granted a release on bond. He won his freedom.” 21 Savage was arrested in Atlanta on Feb. 3 by ICE on grounds he had violated his visa. He’s been incarcerated ever since. His legal team claims he was arrested unlawfully. Jay Z, who reportedly paid for some of the legal team for 21 Savage, issued a statement after his release today. “We will continue to stand with 21 Savage and all the families that continue to be unfairly victimized by our country’s broken immigration policies.” California Congresswoman Zoe Lofgren said she was concerned over what message 21 Savage’s incarceration sent. “His detainment in an Atlanta ICE detention center raises a number of questions,” she wrote. “First, that he continues to be held there even though he apparently has been undergoing immigration processes to become a legal resident brings into questions once again the Trump Administration’s policies to initiate drastic enforcement actions that actually interfere with the ability of individuals to follow the law and to obtain legal status as provided by our immigration laws. … Secondly, as it appears he poses no danger to society nor does he appear to pose a flight risk, questions arise as to why this individual remains in custody rather than released on bond while his immigration case proceeds. … Finally, as a successful artist, he is able to give voice to the views of so many Americans who are critical of Trump Administration policies, activity that is protected by the First Amendment. His presence in the United States has been known to the Department of Homeland Security for some time, certainly since his application for a U-visa. Recently he released a song criticizing the activities of the DHS in its treatment of immigrant children at the border. It was just a few days later that ICE chose to arrest him. Was his arrest in response to his Constitutionally protected speech? It looks like that. If so, that cannot be tolerated in a free society.” According to Variety, 21 Savage’s legal team is a top tier of attorneys that includes Alex Spiro, who was hired by Jay Z and his Roc Nation. The rapper reportedly has children in Atlanta. His personal attorney, Dina LaPolt, says, “They have no right to keep him.”