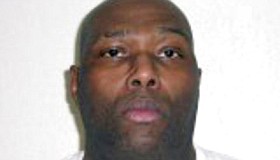 The Arkansas Supreme Court ruled Thursday that a death row inmate who was spared from execution two years ago is not entitled to new DNA testing of evidence that his attorneys say could exonerate him, reports the Associated Press.

In a 5-2 ruling, justices upheld a lower court ruling denying convicted murderer Stacey Johnson’s request for additional testing of evidence from the 1993 killing of Carol Heath. Attorney General Leslie Rutledge said the ruling clears the way for Johnson’s execution. A date has not been set and Arkansas currently doesn’t have any lethal injection drugs.

“Carol’s family has waited more than two decades to see justice, and it’s time for Arkansas to hold Johnson accountable for his heinous crime,” Rutledge said in a statement. Johnson’s attorneys argued that there were major limitations in DNA testing when Johnson was convicted of killing Heath. Among the 26 things they want tested are the rape kit and a towel that was found at the scene.

Justices, however, said the presence of another person’s DNA on the evidence or Johnson’s absence from it couldn’t explain away other evidence linking him to the crime. That evidence included a cigarette butt with Johnson’s saliva on it that was found in a bloody green shirt at the crime scene and Heath’s daughter’s testimony that she saw Johnson standing over her mother’s body with a knife in his hand.

“In sum, none of the evidence that might result from the proposed testing could advance Johnson’s claim of actual innocence or raise a reasonable probability that he did not murder Carol Heath,” Justice Shawn Womack wrote in the majority opinion. One of the justices who disagreed said the testing would eliminate any doubt surrounding the case.

“The fact that we are instead rejecting that opportunity leaves me troubled. What are we so afraid of?” Justice Jo Hart wrote in a dissenting opinion. Johnson was one of eight inmates Arkansas sought to execute over an 11-day period in 2017 before its supply of a lethal injection drug expired. Johnson and three other inmates were spared by the courts and Arkansas ultimately put the other four men to death.