The reason for the season is year-round in gospel music 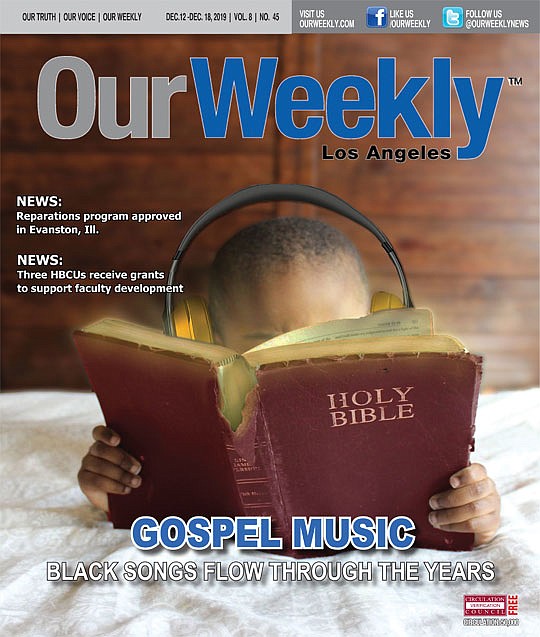 Gospel. The word derives from the Old English godspell, a translation of Greek “evangeline,” meaning good news. According to the Bible, Jesus and his disciples declared the gospel, essentially glad tidings concerning salvation and the kingdom of God. In present day, that gospel is still being told by disciples in the church, in religious schools, on evangelical street corners and in gospel music.

According to those disciples, the gospel music message is to be applied in daily life, not only during the Christmas season. The soul of gospel music reaches back to when African Americans were first brought to this land and were forced to work the plantations.

Back then, on occasional Sundays, groups of slaves would respond to the calls of the visiting preachers’ songs. Later, they’d sing those gospel songs and set the Bible stories they had learned to rhythms while they were working the fields.

Recently, movie watchers heard some of these songs in the film “Harriet.” In one scene, Harriet Tubman, a diminutive Maryland freedom fighter, sang from a ship on a river. A number of Union Army gunboats floated behind her as she sang:

“Wade in the water,

Wade in the water, children

Wade in the water,

Earlier, Harriet snuck onto a plantation and learned about the positions of rebel soldiers and Confederate ammunition up river. She told her slave informants to be ready when the gunboats returned on their way back down river to Beaufort, S.C.

In the film’s moving, slow-motion scene, dozens of slaves came running, racing to the river when they heard that spiritual song.

It’s also said that Tubman often sang low outside of slave cabins when she ventured south to free slaves still in bondage:

An’ I don’t want it to leave me behind.”

After the Civil War, Black “jubilee” groups were formed in Black colleges. These groups employed singing with four-part harmony.

One of the earliest and certainly the most successful of these groups was the Fisk University Jubilee singers, which, at one time, was composed of a nine-member choral ensemble one sang Negro spirituals. During student vacations, they would travel across the country to sing the old songs at meetings on behalf of the school.

Fisk University opened in Nashville in 1866 as the first American university to offer a liberal arts education to “young men and women irrespective of color.” But five years after it’s opening, the school was in financial trouble.

George L. White, Fisk treasurer and music professor, created the ensemble and took it on tour to earn money for the University. Many of the buildings on the campus of Fisk were “sung up” by the jubilee singers through their regular fund-raising campaigns.

It was White who coined the “Jubilee Singers” name, a biblical reference to the year of jubilee in the Book of Leviticus.

In 1872, President Ulysses S. Grant invited the Fisk Jubilee Singers to perform at the White House. Today, the a cappella ensemble performs at venues across the country.