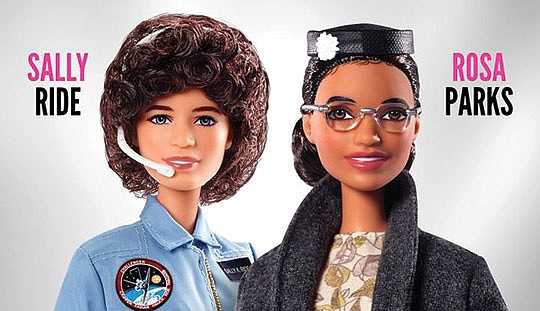 Children all over the world can now play with the newest Barbie dolls patterned after civil rights icon Rosa Parks and astronaut Sally Ride, reports the Huffington Post.

Mattel announced on Monday that the two iconic women are the newest additions to Barbie’s Inspiring Women series. Parks, a famed civil rights activist, and Ride, the first American woman and youngest American to travel to space, will each come with educational information about their historic contributions so that children can learn while playing.

“These historical women broke boundaries that made the world a better place for future generations of girls,” a press release from Barbie’s makers read. The Inspiring Women series, which debuted on International Women’s Day last year, includes dolls based on other legendary figures, including artist Frida Kahlo, aviator Amelia Earhart and NASA mathematician Katherine Johnson.

“As a brand that is dedicated to inspiring the limitless potential in every girl, Barbie is shining a spotlight on role models, historical and modern, to show them they can be anything,” Lisa McKnight, senior vice president and global head of Barbie, said. “Both Sally Ride and Rosa Parks are change makers, so these dolls celebrate their achievements, while also encouraging girls to challenge the status quo.”