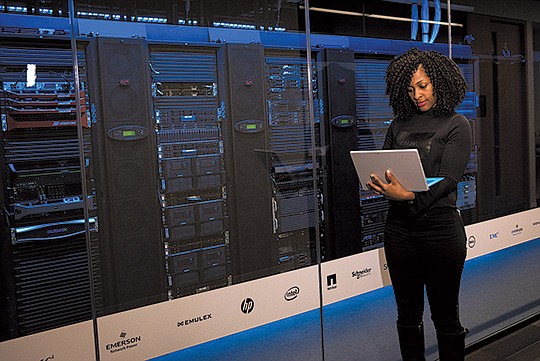 Joye Raimey drove all the way from Las Vegas to attend the 2019 Innovation Co-LABoration held July 26th at LA Live, presented by AnitaB.org.

She got a job lead that morning while waiting for the doors to open.

“That’s one of the reasons I came,” Raimey said. “To network.”

Having heard about the event in “Sistacircle,“ a Facebook group for Black women in technology, Raimey made the drive and stayed in a small Airbnb apartment for two nights. In return, she and some 200 other paid attendees enjoyed a continental breakfast, networking, speakers, panels, workshops, lunch and interestingly enough, head shot photos.

“I’ve been meaning to get one,” Raimey said following the session where professional photographers took multiple shots of each person standing in line. “If they just send one, I’m fine with that.”

She plans to add the head shot to her LinkedIn profile.

The day-long summit, sponsored by Northrop Grumman and the National Diversity Council, highlighted the issues surrounding the recruitment, retention and advancement of women of color in technology.

In 1987, computer scientist Anita Borg joined with 12 other female technologists to found Systers, a digital community for women in computing.

Today, AnitaB.org works with technologists in 80 countries and partners with academic institutions and Fortune 500 companies worldwide.

“Around the world, women are not full partners in driving the creation of new technology that will define their lives,” the late scientists said. “This is not good for women and not good for the world…Women need to assume their rightful place at the table, creating the technology of the future.”

Research has proven that organizations which actively include women benefit from increased innovation and better bottom line results.

“Are we powerful? Yes we are!“ AnitaB.org’s current president, Brenda Darden Wilkerson, said during the opening presentation. “We’re stronger together, we’re learning together and we’re networking together, listening to each other and learning how we can make a difference together in this world.”

“Even though I’m happy you are here, we want you to be there” she told the diverse, mostly female audience.

One professional development session of the day was titled “Six Strategies for Advancing the Careers of Women of Color.”

1) Mentors and sponsors are both vital aspects to success in the tech industry. The session explained that both relationships should be cultivated over time and be allowed to be developed “organically.”

“It’s important that you have more than one mentor,” Dr. Danielle Jenkins, founder of Integrity Management and Consulting Group said, explaining that sponsors are something different.

“Sponsors are the ones to advocate for you,” she said. “You need both.”

“Your network is your net worth,” Jenkins said.

3) Develop resilience: your ability to bounce back helps you to become an effective leader

5) Speak up—Closed mouths do not get fed. Ask questions politely

6) Pay it forward and give back to your community

“It’s important that we empower each other,” Jenkins said. “Hopefully, our children won’t have to be here looking at these same numbers.”

While networking at the summit, Raimey learned Northrop Grumman, one of the event sponsors, has “returnships” for non-traditional job seekers. Raimey had heard of the same type of opportunity at Twitter, so her new networking friend offered to contact her girlfriend at Twitter so they could look out for Raimey’s resume.

“I’m so happy I came,” said Raimey, whose specialty is program development and code writing.

“But I don’t want to limit myself,” Raimey added. “The cloud is huge.”