Portion of Crenshaw Boulevard will be closed until October 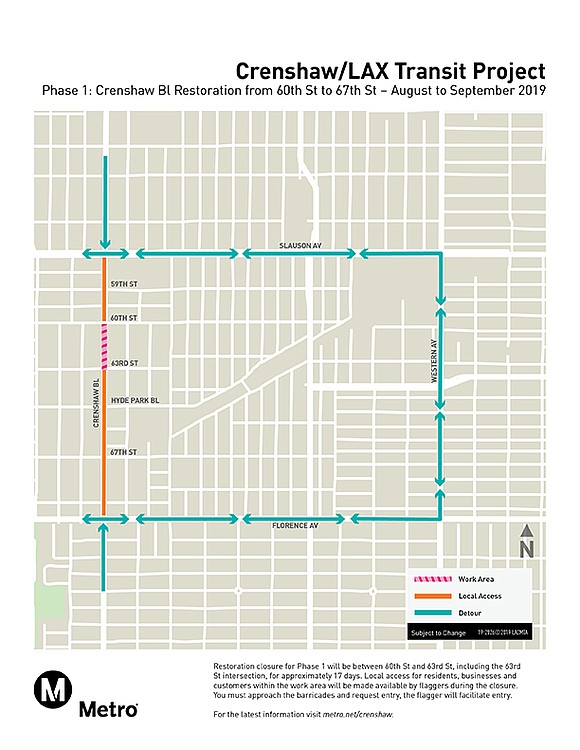 A segment of Crenshaw Boulevard in the Hyde Park area has closed for a transit restoration project, Metro officials said.

Crenshaw Boulevard will be closed in three consecutive phases, progressing from north to south from 60th Street to 67th Street. The work is expected to be completed in October.

The work begins at 9 a.m. Monday and will involve the removal of concrete panels, underground utility improvements, and the back-fill and roadway pavement. All businesses will remain open during construction, and access to the construction area will be maintained for residents.

The closures will proceed as follows:

—Phase 1: Full closure of Crenshaw Boulevard between 60th Street and 63rd Street, including the 63rd Street intersection for approximately 17 days.

Metro Bus lines 40, 210, 710 and 740 will be detoured on Crenshaw Boulevard between Slauson Avenue and Florence Avenue due to the project.

The 8.5-mile Crenshaw/LAX Line is a $2.058 billion light rail line that will connect the Green Line and the Expo Line. It will have eight new stations to serve the Crenshaw, Inglewood and LAX communities. It is expected to open during spring/summer of 2020.