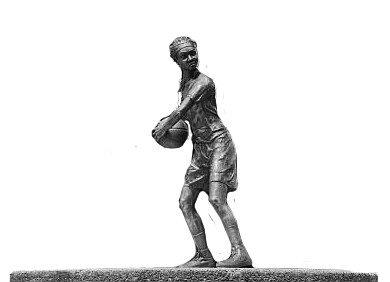 The girl, of middle-school age, is 5-foot-4 inches tall, seemingly contemplating where to make a pass. Strong legs set apart, she holds a basketball sharply to one side. Sculpted from bronze, she is the first commissioned statue of an individual African-American girl to join the city’s array of about 1,500 public sculptures, very few of which depict females.

The statue, “MVP,” was unveiled July 31 at the Smith Playground and Recreation Center in South Philadelphia. Brian McCutcheon, an Indianapolis-based artist who lived in Philadelphia for 10 years, was chosen from a number of artists to create a work of art for the Smith Playground after the city’s Office of Arts, Culture and the Creative Economy sought proposals under its Percent for Public Art program.

It was his idea to sculpt an African-American girl. He used Scottlynn Johnson, a 12-year-old who lives near his studio in Indianapolis, as his model. She also is a basketball player, he said. “My first thought was to build a monument to the people who typically use the park,” McCutcheon told the newspaper on July 30. “And with the politics of the day, and just thinking about how people of color are not represented in public art, it seemed a natural fit. Originally, I wanted to model her after a younger version of Dawn Staley.”

McCutcheon was referring to the North Philadelphia native who is head women’s basketball coach at the University of South Carolina, a three-time Olympic gold medalist, and a member of the Naismith Memorial Basketball Hall of Fame. But city officials, he said, were reluctant to commission statues of the living.

McCutcheon said he researched the city’s sports history and decided that Ora Washington (1898-1971) would be the inspiration. Because the project was to be “site-specific” to Smith, he decided to make the figure a young girl similar to the users of the playground. Washington excelled at both tennis and basketball. After moving from Virginia to Philadelphia, Washington first played for the Germantown Hornets, a women’s basketball team affiliated with the Germantown YWCA, then known as the “Colored YWCA.”

She later played professional basketball with the Philadelphia Tribunes, a team sponsored by the Black-owned newspaper. And between 1929 to 1937, she won the American Tennis Association singles title eight times out of nine years.