Black homeownership continues to lag behind other communities 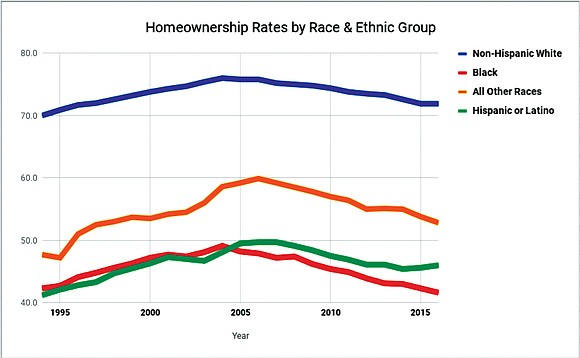 More than 50 years ago, the “Fair Housing Act” became a law to help minorities receive equitible housing opportunities and not face discrimination. However, racial disadvantages are still implanted in society and the U.S. housing market.

Not much has changed.

According to the article “Black Homeownership Falls to Record Low as Affordability Worsens” published by Bloomberg News, African-American homeownership is at 40.6 percent, where as White homeownership has increased to a reported 73.1 percent.

Black neighborhoods are facing an “urban crisis,” that includes years of exploitation and segregation from White neighborhoods. Black neighborhoods had to deal with disinvestment and institutional neglect for decades prior 1968, yet brokers still charged them high prices for low-quality homes, because they were aware of the fact that African-American homeowners had no other option.

Almost 40 years later, between 2007 and 2009, the real property value of White homeowners decreased by about 9 percent, whereas, a 12-percent decrease hit Black homeowners.

Although the “Fair Housing Act” prohibited housing discrimination based on race as the primary federal statute required, it didn’t—and still doesn’t—acknowledge three other major issues that minorities face in many communities. These impediments include a lack of [financial] infrastructure, and environmental justice, and racial disadvantage in subprime lending.

The article spelled out the failure of the federal government to take on greater responsibility to produce affordable housing directly, a loophole for real-estate and banks.

The American Civil Liberties Union (ACLU) in 2007 compared the total wealth of median households of African-Americans and Whites. “Prior to the crash, the median wealth for a White household excluding a home was $92,950. For Blacks, that figure was $14,200,” according to the article.

However, when the “Great Recession” began in late 2008, Blacks were again targeted by banks who were giving out subprime loans for homes (loans specifically designed for low-income persons). Many of the Black recipients of these loans were eligible to qualify for prime loans. This allowed lenders to charge African-Americans higher interest rates than Whites, and resulted in many foreclosures of Black-owned homes. Those properties were either bought by investment management companies and converted into rental properties, or they would be placed back on the market, for an increased price to purchase.

The Atlantic in 2015 reported that “according to a 2014 report from Zillow, Black Americans make up only 3 percent of conventional mortgage applications, the lowest rate of any racial group, and Blacks also face the highest denial rate, about 25 percent versus only 10 percent for White applicants.”

Many of the properties purchased by African-Americans prior to the Great Recession were much older and in need of repair. This, according to the ACLU, remains a challenging problem for perspective Black homeowners.