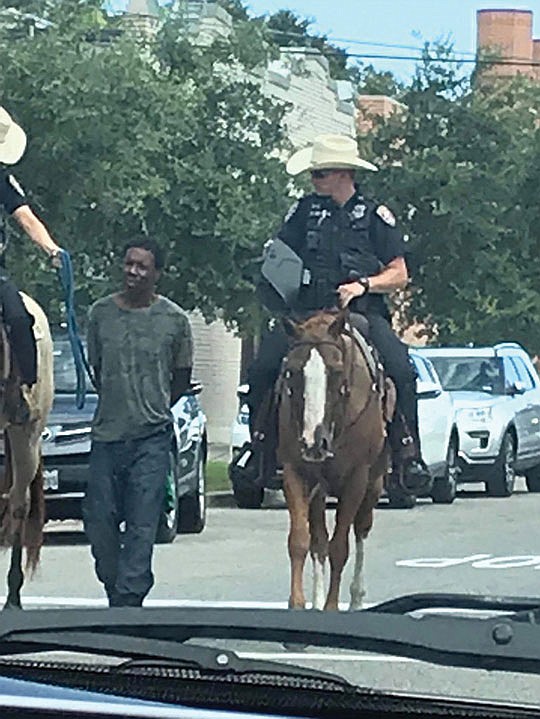 Can Texas get any more racist? The police chief of Galveston, Texas, apologized on Monday night after a photo emerged of two White officers on horseback leading a Black suspect in handcuffs down the street with a rope tied to him, reports the New York Times.

The image was taken by an onlooker on Saturday and was shared on social media, where it has gone viral and sparked outrage toward the Galveston Police Department, especially among African-American people. Many pointed to the photo’s symbolism, saying it harked back to slavery and the long history of racism and violence by Whites against Black people in the United States. The Police Department identified the man as Donald Neely, 43, whom authorities said had been arrested on a charge of criminal trespassing.

“First and foremost, I must apologize to Mister Neely for this unnecessary embarrassment,” Vernon L. Hale III, the city’s police chief, said in a statement posted on the department’s Facebook page on Monday night. “Although this is a trained technique and best practice in some scenarios, I believe our officers showed poor judgment in this instance and could have waited for a transport unit at the location of arrest.”

The Police Department identified two officers as P. Brosch and A. Smith and said that the officers’ body cameras were activated at the time of the episode. The chief’s statement did not say if the officers faced disciplinary action. “My officers did not have any malicious intent at the time of the arrest, but we have immediately changed the policy to prevent the use of this technique and will review all mounted training and procedures for more appropriate methods,” Chief Hale said. “We understand the negative perception of this action and believe it is most appropriate to cease the use of this technique. The police chief has taken immediate action to suspend this technique of transportation during arrests.”

In an interview on Monday night, Leon Phillips, the president of the Galveston Coalition for Justice, called for the two officers to be fired. “If it was a White man, he wouldn’t have been treated that way,” Phillips said. “I guarantee there’s nothing in their rules that you can put a leash on a guy while you ride down the street on a horse.” Phillips said the person who took the photo and a second image wanted to remain anonymous. He said the imagery was raw for many African-Americans. “Every Black person that’s over the age of 30 years old will have a thought of what it used to be like,” Phillips said. “Younger people, they have a tendency to not get emotional about something like this. I get emotional because I came from a segregated time, and people said and did whatever they wanted to.”