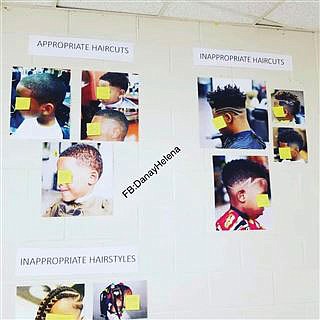 An elementary school in Georgia is facing backlash over a display depicting “appropriate” and “inappropriate” hairstyles for students, reports NBC News. All of the children featured on the poster — taken down Aug. 1, the same day it had been put up at Narvie J. Harris Theme School in Decatur — are Black.

Danay Wadlington, who uploaded the now-viral photo to Facebook on Aug. 1, is the owner of a beauty salon in the nearby city of Duluth. Wadlington told NBC News on Monday that she posted the photo — which has been shared more than 4,000 times on Facebook — as well as on Instagram and in tweets, after it was sent to her by a client, whose child goes to the school. That woman did not want to be identified. She said she took the photo at a school orientation. The children's faces were shielded by yellow Post-It notes.

It is unclear if they were students at the school, which has a student body that is almost entirely Black. “It wouldn’t have been so bad had they included other races, but the fact that those are all little Black faces and those are traditional Black hairstyles, makes it worse,” Wadlington said. “They already have them wearing uniforms, why not let them have some individuality with their hair."

Wadlington said she believes the school took down the display — which shows boys with varying fades and tapered Afros, and girls with braided styles — only following public outcry. According to the poster, designs etched into a male student's hair were “inappropriate,” while cuts featuring hair even across the head were deemed acceptable. The wearing of hair barrettes by female students was labeled “inappropriate.”

Jason Allen, an educator in Atlanta, was among those to assert the display was racially insensitive. “This type of display of cultural insensitivity is due to a lack of oversight, accountability, professional decorum and quite frankly, care and concern for the social and emotional impact of Black children by this school’s leadership and PTA,” Allen said in a statement.