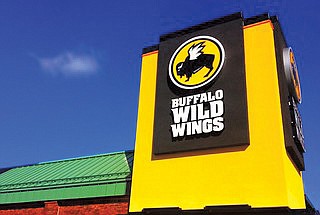 Three Black patrons of Buffalo Wild Wings are suing the restaurant chain, alleging their White server at the Hollywood location wrote on their receipts during a January visit. The note suggested how much they should tip and called them foreigners when they complained that non-Black customers were not issued the same message.

“Plaintiffs were extremely upset at the way Buffalo Wild Wings (BWW) had treated them, which was due to their race and color...,” the suit states.

The suit cites BWW’s own internal policy in which it states the chain “depends on the character of its team members” and demands they demonstrate “the highest legal, moral and ethical standards of honesty, integrity and fairness.”

The suit seeks unspecified damages. A BWW representative did not immediately reply to a request for comment.

The trio went to the restaurant on Hollywood Boulevard on Jan. 18 after attending a networking event, the suit states.

The plaintiffs’ server, identified only as a White male named Austin who was 25 to 30 years old, “essentially ignored” the trio while giving normal service to non-blacks, the suit states. They had to ask three times for water after they were seated, according to the suit.

When the server presented them with their receipt, the server had written “Standard tip=$5,” according to the suit.

“Plaintiffs were shocked and distressed,” the suit states.

The three checked with customers of White and Indian backgrounds and none had the same message on their receipts, the suit states.

When Flakes asked the server if the message was standard practice at BWW, the employee replied loud enough for other patrons to hear, “No, I do this for foreigners, such as yourselves, who don’t know how to tip well,” the suit states.

The plaintiffs then complained to the manager, who “admitted he knew of the discriminatory practice referring to blacks and told them, “a few of our servers have started doing this with certain groups,” the suit states.

The manager did not apologize for the server’s alleged actions and told the plaintiffs that if they were upset, they should call a phone number on their receipt and take a customer survey, the suit states.