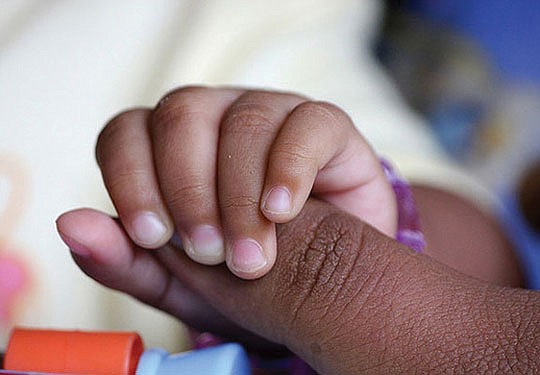 Despite ranking first in per capita health care spending, the United States ranks only 55th out of 225 countries (in order of low to high) for infant mortality rates, with 5.8 deaths per 1,000 live births.

To effectively reduce this level of infant mortality, the U.S. must first address one of its root causes: low birthweight, which accumulating evidence suggests is caused in part by Black women’s stress.

Chronic maternal stress is one likely cause of low birthweight. Chronic stress produces hormones that damage the body over time. This damage, called allostatic load, can be measured and scored using health data (e.g., cholesterol, blood pressure, cortisol levels) and is a measure of cumulative adversity and disadvantage. High allostatic load scores have been linked to lower life expectancy and poor pregnancy outcomes, such as pre-term birth and low birthweight.

The combined efforts of policymakers, researchers, and medical professionals can address racial disparities in infant mortality. Policymakers can support expanded data collection to examine within-group differences in infant mortality. For example, while Black infants have higher infant mortality rates overall, more and better data can enhance our understanding of important differences by maternal country of origin, length of time in the United States, education, and income level. This, in turn, may help medical professionals tailor interventions to meet the unique needs of the diverse population of Black women in the United States.

Researchers may be able to help by studying which health data are key to measuring allostatic load, since there is currently no established, validated way to assess it. There is also limited information about how pregnancy impacts the measurement of women’s allostatic load. The evidence that allostatic load may underlie racial disparities in infant mortality reinforces the importance of developing a reliable measure for Black women, both before and during pregnancy.

Finally, medical professionals can address Black women’s allostatic load by incorporating stress-reducing interventions (e.g., mindfulness-based stress reduction, meditation, support groups) into their treatment plans for Black women before and during pregnancy. In addition to individual interventions, population-based strategies are also needed; one study found that community-based interventions may reduce stress for Black pregnant women. (The next blog in this series will more fully explore the contributions of medical professionals and providers to mortality disparities, as well as their potential role in mitigating them.)

Addressing racial disparities before and during pregnancy may reduce the incidence of low birthweight and save the lives of Black infants. Efforts to lower Black women’s chronic stress and allostatic load are critical for their infants’ health and well-being, and for the health and well-being of Black women themselves, across all stages of their lives.