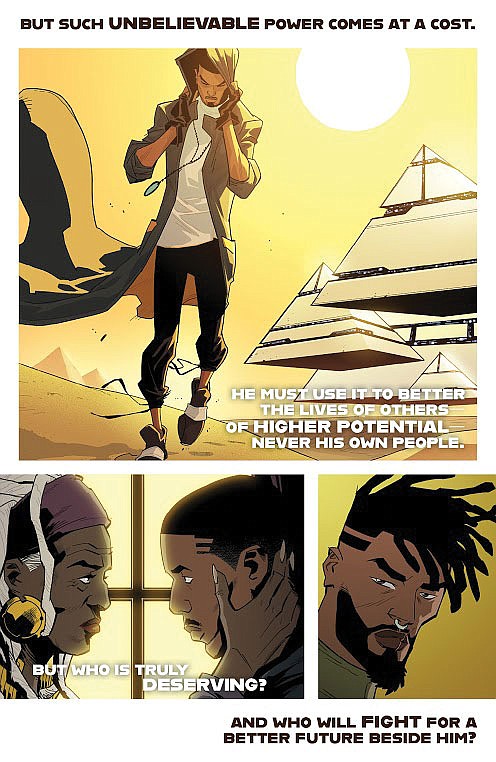 Comic book industry veterans Khary Randolph and Brandon Thomas have created “Excellence,” a comic book about a secret society of Black magicians who work to better other people’s lives. Although the book is set in a fantastical world where magic is present, Thomas said that it deals with real-world issues such as the relationship between fathers and sons, corruption and the limits of power.

“Even in a world like this, there are no easy solutions,” said Thomas, who lives in Murrieta. “For all of their powers, gifts and abilities, the important things are still beyond them.”

“This is easily my most personal comic,” he said. “This was very much my own experience.”

Thomas said that he was interested in exploring the magic genre because there are literally no boundaries to what the characters are capable of doing.

“We’re still dealing with worlds where impossible things happen, and whether that’s due to tech or magic, it’s always exciting to me. Hell, it’s the reason I love comics in the first place—there are never any limits, no matter the genre,” said Thomas, in an interview with Image.

Both Thomas and Randolph have worked for comic giants DC and Marvel, as well as independent publications. Thomas also wrote and co-created the critically-acclaimed series “Horizon” for Image Comics and the award-winning series “Noble” (Lion Forge.) However, Randolph says he enjoys working for an independent house like Image. While working for mainstream publications brings creators more publicity, they till have to go through several layers to get their work improved, he said.

Randolph added that one of the benefits of working for an independent publication is that you have more creative freedom.

“When you work for an independent, you have a lot more freedom,” said Randolph.

Randolph’s artwork in “Excellence,” has an Anime (Japanese animation)-feel, which is not surprising since he has worked in animation. He also said he was a child of the ‘80s and was influenced by cartoons such as “Ghost in the Shell,” “Dragon Ball Z” and “Voltron.” Randolph also said he came into the industry in the 1990s and was influenced by the bombastic style of the time.

Although he has worked as an animator, Randolph still loves working with comic books.

“I still think this is still the best medium for getting your ideas out,” he said.

Both Randolph and Thomas agree that now is a great time for comic books with the success of movies such as “Black Panther” and “Spider-Man: Into the Spider-verse.”

Thomas said it’s also important to have black writers and artists working in an industry that has been criticized for focusing too heavily on white characters.

“The more diversified our entertainment gets, it’s going to inspire people like me and Khary,” he said.

“There is always something a little bit extra special when characters look like you,” said Thomas.

“This kind of book is the thing I wish had existed when I was 13,” said Randolph.

“Excellence” is in stores on May 8.