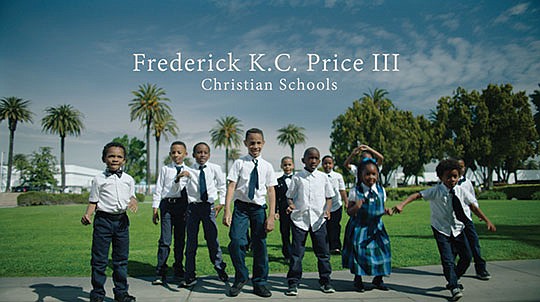 The video features students from preschool through twelfth grade dancing, cheerleading, and rapping on the backdrop of the “Allen L. Crabbe III Court.” The significance of this basketball court is notable, as it was recently named after former Brooklyn Nets star Allen Crabbe. Crabbe’s donation has allowed the school to continue its mission of empowering the next generation of leaders while imparting Christian values.

At its core, the lyrics of “I’m Here” is about striving for academic excellence and aiming for results, so it made sense for the music video to shine a spotlight on the students who conceived of this original song from start to finish. The music video, directed by Felicia Manning, features performers Nehanda Gaines, Xavier Rowles, and David Hollomon with original lyrics from Bethany Wright and music produced by Kyle Taylor. With support from the school’s administration and performing arts department, Price students developed the original music over the course of a few weeks while juggling their many academic and extracurricular responsibilities.

Frederick K.C. Price III Christian Schools boasts a 100-percent graduation rate and a 100-percent acceptance rate among its student population. As one of the last standing schools rooted in Christian traditions in South Los Angeles, Price Schools offer students an academically-accelerated curriculum and excellent athletics program while making tuition affordable for families. “I’m Here” is a testament to the virtues instilled in the students at Price, and their ambition to leave their mark academically as well as in their community.

Frederick K.C. Price III Christian Schools (Price) empowers students from preschool to 12th grade through providing world-class, college-preparatory education grounded in Christian values in a safe and nurturing environment. Founded in 1986 by Angela M. Evans, Apostle Frederick K.C. Price, and Dr. Betty R. Price, the school is located on the campus of the Crenshaw Christian Center Faithdome in South Los Angeles. Price Schools is fully accredited by the Western Association of Schools and Colleges (WASC) and the Association of Christian Schools International (ASCI). Visit www.priceschools.org to learn more and to enroll.